Actually…it wasn’t so bad a deed to arrive by plane. The scenery was mostly covered under clouds, but those few holes left open provided a magnificient mountain area so completely different from the other places I have been so far. When the plane turned in to land it followed a river bed to get down between the mountains. That’s also the reason why the airport is so far outside Lhasa (1 hour drive): You’ll need to find a long straight stretch of land where you can build a 2~3km runway and still have some space for an ordinary passenger plane to get down between the mountains. 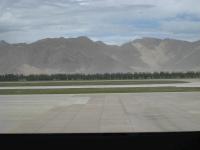 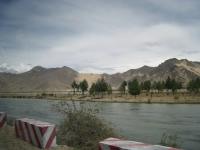 LS_20070622_150528.jpg: The airport’s runway seen from within the terminal. Mountains here are actually disappointingly rocky or sandy, not much green around.

LS_20070622_152915.jpg: My guide, a local girl with OK English knowledge picked me up at the airport and we drive one hour into Lhasa proper. This picture I made out of the car on the way: There are various rivers around, which my guide all named, but sorry…I forgot. The water is rather turcouise-green than blue, which probably explains that—as I just learned—the blue prayer flags stand for the sky, while the ones standing for water are green. (The other colors: White – clouds, Yellow – Earth, Red – Fire) Driving into Lhasa we passed by this all-famous Potala Palace, looks impressive…but I will get there as part of the guided tour only the day after tomorrow. The hotel is really right in the middle of everything (unlike the Xi’An “centrally located” hotel, which was outside the city walls), a bit set back, very OK and clean rooms, and the best: I am city in a cafe frequented by many other travellers right next to the hotel with free WLAN access 😉 Just a long conversation with another German next to me, who has basically the same enforced schedule as I have, but will later meet friends to do the trans-Tibet trip to Nepal. Lucky he…but he pointed me to some blackboards at hostels where other travelers seek for company. Gonna have a look if I find some company for the two days I am off here in Lhasa. Or maybe even longer…maybe I can shift my unfortunately already reserved train ticket, which is not cheap. Knowing now how things work I would have done it differently, but CITS insisted to get be transportation out of Lhasa, too, while that German just booked a hostel and 2 days of sightseeing with another agency (actually: from BeiJing, so he was more successful in finding it) and organized himself for transportation. 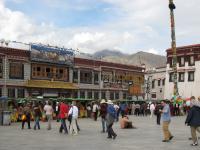 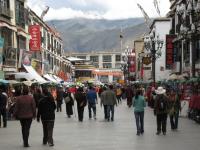 LS_20070622_172317.jpg: I have certainly ignored the guide’s request to just stay at the hotel and relax and probably eat in their western restaurant. Instead I strolled around the streets in Lhasa’s old city center. Lots of souvenir boths around, but all in all life is more easy going here than in the Chinese cities. It’s rare that people call after you to sell their stuff. You are mostly left alone.

Dining above the roofs

After some searching (I originally wanted to find a Lonely Planet recommendation, but somehow failed) I decided for a “roof top” restaurant nearby. Access is by a stairway where I had expected somebody to greet me…but greeting ladies like in China do not seem to be a habbit in Tibet. The people sitting there were operating public phones. I just walked up undisturbed, reached the roof top via another daring staircase. But at least I could get a menu with some English, although many items remained a secret to me due to their specific names. I decided for “Tibetan Traditional Cooked Yak Meat”, a spinach creme soup, and some sweet tea. The tea might be most surprising…usually I would drink beer. But due to the altitude difference (3.500m here) I did have a slight headache. Nothing bad, but I didn’t want to put beer on top of it. And I was told that the typical Tibetan drink “Yak Butter” is something you really really need to get used to, so I ended up with sweet tea, which was very nice…mostly tea with a lot of milk and sugar. 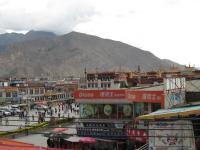 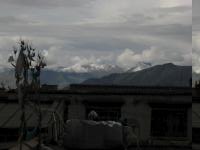 LS_20070622_180016.jpg: From that roof-top restaurant across the Lhasa old city. The buildings in the back with the yellow roofs are a famous temple, Jokhang. Right in front of them, however, have the first Chinese food chains taken up position already. More original buildings on the left-hand side. 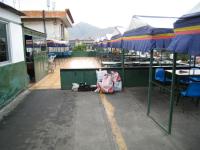 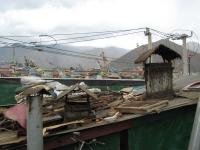 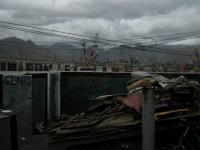 LS_20070622_184133.jpg: Yeah…the “Mandala 2 Roof-Top Restaurant”, a bit simplistic: A number of long tables for up to 8 people under Tibetian-typical picknic tents. I had learned on the way from the airport to the city that Tibetans love picnicking, but usually do that under a tent. The Yak meat was a bit difficult to chew…the good parts tasted very well, a bit like beef, but there was too much unchewable fat and tendons around.