My last day in BeiJing: I checked out of my hotel…where there was a little troube regarding the payment: As I had extended twice I had to add some more deposit three days ago. I did so like always by credit card. But I had received only the credit card slip, not the piece of paper (“certificate”) you usually receive at JinJiang when checking in and paying the deposit. That was apparently a mistake as the guy were now unsure what to do…well, would it matter at all? Both parties had the credit card slip, which was a “pre-authorization” only anyway as normal when checking into hotels (i.e. the money is authorized but not yet transferred, the perfect option for a deposit). So there was nothing to pay back to me…they just would need to deduct the final payment from my credit card and that’s it…but it took a while. I even had to sign a hand-written paper with a Chinese sentence I could not read and the amount of 600 RMB of the second deposit payment. Fine, fine, I gonna pay attention that I get this “certificate” thing the next time I exptend a stay…

After a morning coffee I dropped by the CITS head office again (Mr Dai had already called me) to do the final credit card payment and pick up the air ticket from Xi’An to Lhasa. All is booked/reserved for me…I just need to follow the agreed schedule. 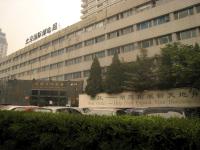 BJ_20070618_122314.jpg: BeiJing JianGuoMen International Post and Telecommunication Office (北京建国门国际邮电局). By no means a remarable building, but an impressive title. And situated right next to the diplomatic quarter you might expect that they know how to deal with international mail, it being probably the largest and most international post office in all BeiJing if not all China. The lady knew exactly how much a postcard to Germany is, but was completely overtaxed when I asked for 20 stamps. Apparently my Chinese questioning was so good that she kept argueing with me in way too fast Chinese…but I figured that she didn’t have enough stamps, though she was the exactly right person to talk to and even on request did not want to send me to any other counter. Checking her and the next desk she got hold of 3 (three, drei, 三个) stamps, which I found a bit few, having written already more postcards and planning to write even more. She asked me to wait a moment, and after 5 minutes a colleague came back with a stamp map, containing no less than 15 stamps of the necessary value of 4.5 RMB. I bought all of them…sorry, guys, but none else except for me can send postcards today from BeiJing… 😉

Another tip Anja gave me yesterday: The Lama Temple, BeiJing’s largest and most important temple. That I could have figured myself…but somehow I had lost it out of sight. Getting there was supposingly simple: There is a subway station by that name. But unfortunately not in operation…the metro stopped only at the next. I found a bus for the way back for 1 RMB, had to walk even more along all the temple until I could enter it through the south main entrance. 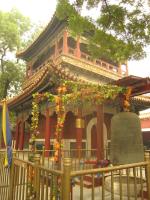 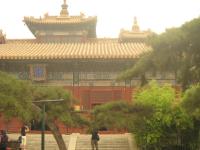 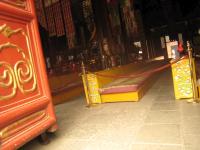 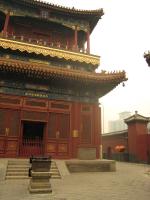 BJ_20070618_134831.jpg: One of the many halls within that area, which was originally built as a residence for an emporer’s son by the name of Yong He (雍和), which explains the Chinese name of the place. Due to intense incense burning the air was full of smoke.

BJ_20070618_135128.jpg: This not strictly legal picture (taking pictures within the halls and temples was not allowed and except for this I sticked to it: But I had to have a picture of this collection of desk lamps, some of them nice and old, others (the red ones) modern versions. This temple is still being actively used by monks, who probably need this light for their studies.

BJ_20070618_135911.jpg: A small side temple. Pay special attention to the public telephone on the right-hand side: Just in case the spiritual connection doesn’t work just call up a Buddha 😉

So…I am writing all this at a Starbucks next to the QianHai lake. Gonna try to upload the stuff now, then find something to eat along the lake. Sooner or later, after picking up my backpack from the hotel, I will head for BeiJing’s West Train station and get on a 12-hour sleeper train to Xi’An. Next stop: Xi’An! 😉

Today’s Lesson: It’s a long way to stamps and Buddha…

BeiJing Hikders offer hikes every weekend. So if you are interested check out their web site. It’s just 200 RMB for a “standard” hike, which includes coach transport to the start, guide, park entrance fees, and a snack after the hike. Highly recommended if you happen to be in BeiJing on a weekend!

The hike I participated in was considered a “lush walk”, category 3, and that only because of a few rocks in the way, which allowed for some funny climbing exercise right before lunch break. It was in a hilly forest area, whose name I could not remember. Something with Xiang tun (香屯). END_OF_DOCUMENT_TOKEN_TO_BE_REPLACED

Today finally a bit of real tourist sightseeing: Two major sights of BeiJing, one very famous, the other one yet to be discovered by a larger crowd of foreign tourists: Summer Palace and Fragrant Hills Park. I have made more pictures in this one day (86 in total) than in all other days in BeiJing together. No, don’t worry…you’ll get a small selection only. I mean…it’s just 2 sites, and especially about Summer Palace everything is said and shown already in thousands of books, so I cut myself short. Nothing really extraordinary happened today anyway. I took the subway out to XiZhiMen (西直门) and hoped to find one of the busses indicated by Lonely Planet. END_OF_DOCUMENT_TOKEN_TO_BE_REPLACED

Finally, finally…the next days are finally scheduled. It is not like I had dreamed of, but after all the failed attempts I have today agreed into a very much guided tour for the next few days. Most of the elements I wanted to have are in there, though not necessarily in the order I had wanted, and also not in the way. But one thing after the other… END_OF_DOCUMENT_TOKEN_TO_BE_REPLACED

Yet another restfull day…but also unproductive. I spent some hours with may laptop, trying to find a travel agency office in BeiJing, which knows about the Tibet business. I must be completely silly…I don’t find anything. The only agency I found on the net, which even declares itself being the only Tibet Agency with a BeiJing office, does not state its office address, but asks for first contact by mail. END_OF_DOCUMENT_TOKEN_TO_BE_REPLACED

I was basically walking all day, with no definite destination. I am in no hurry…just wanted to have a coffee before everything starts. END_OF_DOCUMENT_TOKEN_TO_BE_REPLACED

Today a novum: I publish all images that I made throughout the day: A stunning total of 7 (seven, sieben, 七) pictures! I was somehow in slow-motion mode, wanted to leave TianJin, but didn’t want more than finding a Starbucks in BeiJing. So-to-say a rest-in-transit day: END_OF_DOCUMENT_TOKEN_TO_BE_REPLACED

The last hotspot we wanted to see was Tiantan – Temple of Heaven in the south of the city. We had decided to take a taxi from the north exit of Beihai Park to the south entry of Tiantan. END_OF_DOCUMENT_TOKEN_TO_BE_REPLACED

After exiting Forbidden City we decided to visit Beihai Park, only a 10 minutes walk away. Its most famous attraction is the White Pagoda, situated atop a small island within a lake, which again is surrounded by the park. END_OF_DOCUMENT_TOKEN_TO_BE_REPLACED

Beijing in 1 Day I: Forbidden City

OK, imagine, for whatever weid reason you have exactly 1 day to spend in Beijing. What would you do? OK, let’s start with arriving: It’s just a two hour flight from Shanghai. We got on one served by China Air for about 50 EUR one way. Sitting in a comfortable 747, full, but lots of space even in the economomy class, friendly service, a warm snack, that’s kind of travelling… END_OF_DOCUMENT_TOKEN_TO_BE_REPLACED