11 hours hiking, incl. 1 hour lunch break, 25km distance only, but 2.500m altitude difference, netto…with all the ups and downs we probably did 3000m up. In one day, which was yesterday (12-JUN-2007). It is doable given the steep stairways on EMei Shan. It is no fun on the way, partly due to these very stairways. It is one of you best possible experiences after you reach your destination: Golden Summit.

On the way from ChengDu to EMei Shan we did a stop-over in LeShan to have a look at the Grand Buddha. It’s not worth giving it more than 2 hours, I’d say… When we arrived at the long-distance bus station by bus from ChengDu a rickshaw driver was the first to catch us and he brought us to a ferry dock at about the right location according to our Lonely Planet map. The buddha itself is on the other side of the river, so you need to get across. Ferry’s certainly a way. They charged 50 RMB per person, which sounds a bit steep, but what they actually did was to drive by the buddha, give enough time for picture, and go back. Maybe we afterwards could have gotton on a real ferry just to reach the other side of the shore as there was another section of the ticket yet unused, but we had decided quite quickly that we don’t want to spend any more time there. 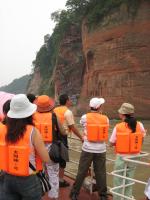 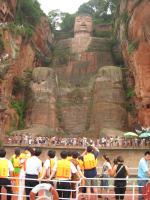 EM_20070711_131757.jpg: All Chinese were wearing life vests. We declined 😉 In the back of the picture you see a long and steep stairway leading from the rock’s top down to the base of the buddha. And it’s all full of people moving very slow. That was the main reason we abandoned the idea of visiting the buddha’s feet.

We reached the town EMei by bus from LeShan and checked into the Teddy Bear Hotel, the best budget option in town with lot’s of free and sometimes confusing information. 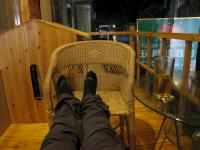 EM_20070711_165353.jpg: I did a quick walk around the start points of all the tourist trails where there were several fairly artificial, nonetheless nice looking sights like this pagoda, which protects a stone from the rain, which came up, which in turn bears on one side the symbol for UNESCO World Natural Heritage…the entire EMei Shan area is protected under this rule.

The idea for the next day was to hike up from a certain point about mid-way, which is reachable by bus and cable-car. According to information of the hotel’s owner, Andy, who willingly and pro-actively offered his help, that hike was to take 7-8 hours with an altitude difference of roughly 1.500m.

But it came differently: I had gotten up early as planned, but Payam fell sick with stomak issues. As we had only one day I instead wanted to take the bus up to the summit and walk only a tiny bit. Didn’t want to do the long walk entirely allone. As I came back down from the room there was a single man sitting at his breakfast table, I just asked him…and it turned out that he indeed was about to hike up the mountain, but got a recommendation for a slightly longer path. We joined forces and started as low as WuXianGang (五县岗), expecting about 8-9 hours hiking and roughly 2.500m altitude difference. That sounds extreme, and in fact it is, but other people did it before, so why not we? We did it…but it took no less than 11 hours hiking (incl. one hour lunch break). We started at 08:10 and arrived on the summit around 20:00 with the last sunlight. 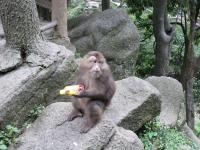 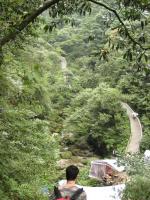 EM_20070712_090448.jpg: Next we quickly reached the Joking Monkey Zone. There were a lot of stories around about these monkeys, which are said to snatch every kind of food or drink you are carrying. Apparently, I didn’t pay attention when entering the zone, still holding my fairly fresh Ice Tea bottle in my left hand. A monkey, which I didn’t see coming, snatch it out of my hand. I managed to unwind it out of his hands, but that was probably the silliest thing I could do…anyway, I had won a small fight, just to listen to a long note of attention of one of the officials around, who we had talked to already earlier in English. What it comes to: Whatever you hold in your hands the monkeys assume to be a gift for them. Don’t try to argue… Well, I put my bottle back into the outer pocket of my backpack. And from there a very quick one snatched it off my backpack! Here you see him with his loot. My recommendations to open the cap went unheard, the monkeys prefer to bite a hole into the bottom and sip the content that way.

EM_20070712_110057.jpg: But shortly after the real fun started: Stairways after stairways, sometimes hundreds of meters long without interruption,… 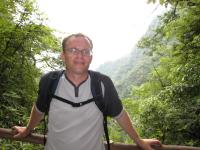 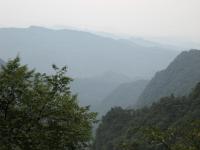 EM_20070712_121635.jpg: But sometimes get paid with fantastic views, which are certainly difficult to catch with such small a camera. I tried nonetheless. 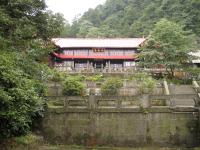 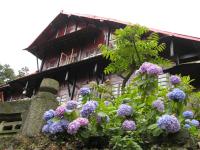 EM_20070712_122400.jpg: Our one-third mark, after 4 hours: Magic Peak Monastery (洪椿坪, 1752m). We were questining ourselves how these places have been built. Every kind of thing needed must have been carried. We already saw lots of porters carrying up heavy stones for a renovation of the stairs on very simplistic bamboo racks.

EM_20070712_124425.jpg: That place also became our lunch place, which was fairly good timing. There were lots of stalls scattered all over the way. This one here made good business as apparently many hikiers choose the location as a logical break. And the very good and filling noodles were still only 8 RMB, which is quite cheap given the remote location where all ingredients need to be carried to. The other stalls over the way did serve food to, but I guess they made most of their business with water. I have absolutely no clue how much water I have drunken on the way. One thing is sure: Without all the stalls (of which we knew upfront, this is China here in the end) we would have needed to carry liters and liters of water on our own, which would have slowed us down quite a bit. 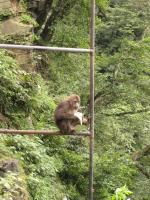 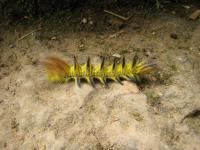 EM_20070712_133416.jpg: Also along the way were sometimes these information panels in the shape of a book, made from wood, given technical data on trees nearby. As nice as the idea is, I found the provided information a bit too technical and had rather liked to learn about specialties of the plant, or their world-wide distribution and how it got here or so…

EM_20070712_141607.jpg: Monkeys are not only found in the Joking Monkey Zone that we had seen earlier, but with less density also across the entire forest.

EM_20070712_143608.jpg: We did see some weird insects on the way, but this here was the most weird one: 5 pairs of legs, about 3-4cm long, the back is on the right as we found out while the thing was shitting 😉 and it moved to the other side (with the longer brushes, i.e. to the left) when touched. I don’t know if it is known to biologists, if not then I name it Raupe Birgeri 😉 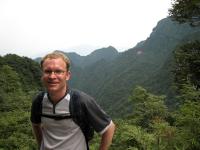 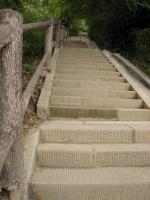 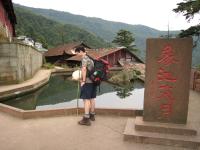 EM_20070712_143755.jpg: I’ve been there…still sweating…the red dot in the slopes of the mountain to the right is the Magic Peak Monastery, which we had left about 1,5 hours ago. We are now level again with the monastery after some down and up as we had to pass through a deep valley… 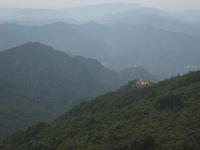 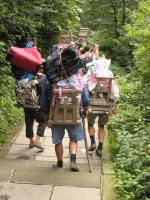 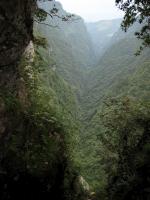 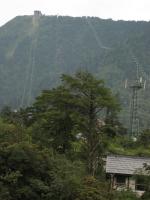 EM_20070712_165014.jpg: Sometimes the long stair climbs are interrupted with fantastic views. I believe, the houses at the edge are around the Elephant Bathing Pool that we had left an hour ago.

EM_20070712_165357.jpg: These are the porters I mentioned before, usually carrying building material or supplies for the food stalls. Here, they took on some luggage of hikers on the way back to make some extra money.

EM_20070712_170906.jpg: Instead, we were actually hoping to catch a cable car for the last 500m ascent. But the car to the right didn’t move at all. We did not recognize that it is an old one and the new one runs along the pair of cables to the left. So we continued walking…climbing…. 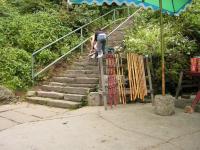 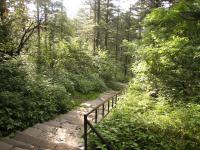 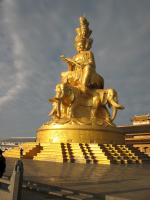 EM_20070712_174849.jpg: On this last section a couple of Chinese joined in as the top-most bus station was just below the cable cars. They were walking with just normal street dress, partly on high heels. This lady here at least recognized her unfitting footwear and did bring some sport shoes, which she puts on here. Others were running along on high heels. 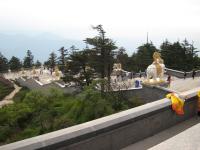 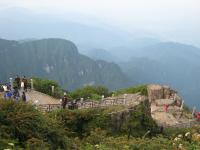 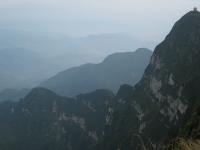 Payam, after feeling a bit better, had gone up by bus and cable car and was so nice to find and reserve rooms for us at the summit. The peak is scattered with hotels, better and smaller ones. We ended up in something giving itself 3 stars, but it was a 3 bed dorm (which fitted us 3 people perfectly) and showers and toilet out on the floor, and not exactly clean either. The beds were good, though, and we slept well.

Sun Rise on the Next Day

Until 5:00am only, with 5:20 even getting a wake-up call by the reception, which we had not ordered upfront. And all this is about the sunrise, which is said to be beautiful here and is the main reason for all the tourists to come up. 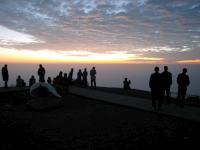 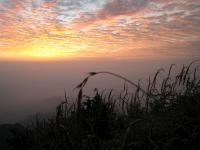 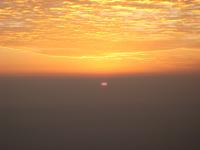 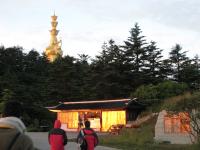 EM_20070713_061821.jpg: Returning to the hotel this small souvenir hut gleams golden in the rising sun together with the actual Golden Summit.

We had to wait one hour until 8am for the first bus to leave the mountain, which arrived 1,5 hours later in EMei town. We had a quick breakfast at the Teddy Bear Hotel and hopped on a (fairly bad) bus back to ChengDu, where we arrived around 13:30. We had left our big luggage at a hostel where we were now going to pick it up and spend some time there relaxing and interneting.

Well…and then we didn’t get a taxi at 18:30…we tried for 35 minutes until we got one. I told the guy to speed up a bit as our flight was scheduled for exactly 20:00. We arrived at the airport at 19:38, rushed through, convinced a lady to check us in (boarding hasn’t started yet), they accepted us, we rushed past the queues at the security check, who luckily let us get in front of the queues, and arrivd at the gate 3 minutes before they started boarding 😉

So we made it to LiJiang, where I am now sitting in a small guest house some in a side lane. And I know already that I am going to spend 1 or 2 days here relaxing before going for the Tiger Leaping Gorge hike. Payam will start earlier. So we will part here: Looks like we both need to be travelling alone for a while.