Just a quick note so you won’t declare me dead: Today was a lush day in ChengDu. Just in the evening I had a brief visit to WenShu Temple, which is actually just a 10 minute walk from my hotel, but into the other direction, where also Payam’s hostel is.

I won’t be able to do a long update tonight as we are sitting here over one or the other beer and plan out the next days, but let me give you a quick heads-up and outlook on our future plans, as in the future the updates here might be a bit more infrequent:

We will leave for LeShan and EMeiShan tomorrow. These are two mountains in ChengDu’s vicinity. LeShan is famed for its huge Buddha statue, but for nothing else. EMeiShan is a 3000m mountain, so it is really a considerable climb. We plan two days, which still is challenging, and we might need to make use of some short-cuts by bus/cable car. But the trick is to be at the top for a sun rise.

On Friday we have flight tickets to LiJiang, which is a small town in Yunnan province, north of KunMing, which is the base town for doing the Tiger Leaping Gorge treck. 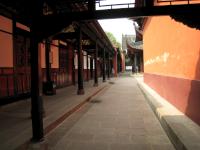 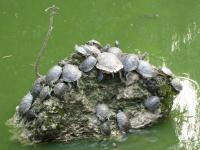 CD_20070710_160807.jpg: Walking way allong the temples of WenShu. The actual temples don’t look much different from others, thus, why I didn’t pick any picture to publish.

CD_20070710_161904.jpg: This mini-pagoda is something special: Less than a meter in diameter at the base, and getting thinner to the top. Pretty nice.

CD_20070710_164055.jpg: That’s a stack of…turtles! And this is probably 2% of the pond’s turtle population, in search for some place out of the water. I noticed them only after a few minutes, before that they intermingled so well with the rocks that I didn’t notice. There are hundreds, probably thousands of them.

Update: We will go with leight-weight luggage to LeShan and EMeiShan, that means: without laptop. Don’t expect updates for the next 2 or 3 days at all.

Today’s Lesson: There are hundreds of turtles in ChengDu.