You likely have seen cool pictures of the LongJi Rice Terraces, like in the rising morning sun, or in moon light, or even covered by snow. Well…we weren’t there at a time you could shoot any of such pictures. Maybe that is why the expectation was higher than what we eventually saw.

I can’t let you off the hook without some pictures of GuiLin. See here for a lot more, but here are four additions: 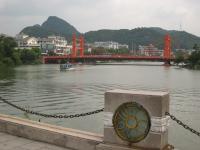 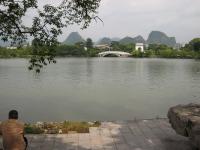 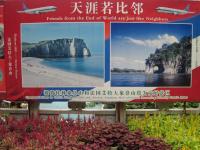 GL_20070720_101527.jpg: If only I would know the names…but funnily this bridge leads to nowhere: The street is blocked at the other end. It is located at the northern end of the inner lakes of GuiLin.

GL_20070720_101558.jpg: Looking from that very bridge to the right (east) finds a suspension bridge, not looking unlike Frisco, but certainly magnitudes smaller 😉

GL_20070720_102411.jpg: At dailight you might even see the limestone hills around GuiLin, here looking north across the northernmost of GuiLin’s inner lakes.

GL_20070720_105037.jpg: I didn’t visit this Elephant Trunk Hill again, did not amaze me last time, would not this time. But while passing along the entrance I saw this poster of the newly-acclaimed sister-sightseeing areas, a bond between France and China: “Friends from the End of the World are just like Neighbours.”

You likely have seen cool pictures of these rice terraces, like in the rising morning sun, or in moon light, or even covered by snow. Well…we weren’t there at a time you could shoot any of such pictures. Maybe that is why the expectation was higher than what we eventually saw. We had opted on an offer of my hostel, which could organize a private driver for 180 RMB per person if there are 4 persons to apply. As it so happened it was another traveller asking for options with me overhearing the conversation. She was alone, we were three…et voila, makes 4. Going by private car saves all the hassle of finding and changing the right busses. It is still a good 2 hour ride from GuiLin to the rice terraces. And another 2 hours back. And then we had about 5 hours to wander around them and have lunch. This is what it looks like: 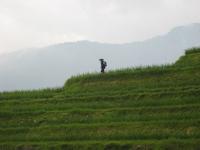 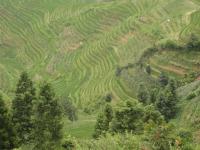 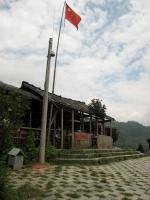 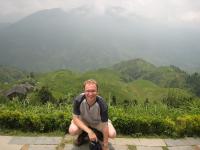 GL_20070721_114444.jpg: Probably one of the better shots, right the very first one when entering the scenic area and slowly walking uphill: A farmer spraying the rice with something, which is unlikely to be natural…

GL_20070721_121707.jpg: In the area we walked there were 2 marked scenic spots. The best pictures are actually made in-between them, but we first walked to number 2, see it here in this picture even with Chinese flag. This is were most tourists go to. And then from there we crossed over to the other spot, see later.

I had actually tried to convince our driver in my best-possible Chinese to pick us up at another parking area, so that we can walk from one scenic area to the other and would not need to return to the same place, but he refused. So we were bound to one of the two scenic areas with these two scenic spots. 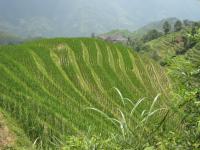 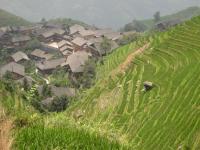 GL_20070721_124336.jpg: …and villages. There are small villages embedded in the fields. They mostly deal with tourism nowadays, even hotels are available.

GL_20070721_124444.jpg: But very obviously the fields are still in use. Otherwise the entire tourist attraction “LongJi Rice Terraces” would not work. 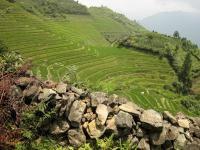 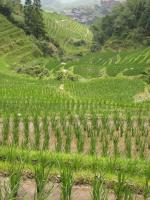 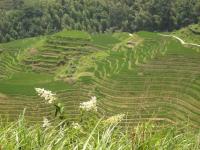 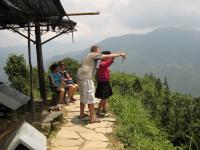 GL_20070721_132328.jpg: This is scenic spot number 1, a lot less frequented, only manned by an either retarded or otherwise disabled woman selling cool drinks. But one of the long-haired women followed us, being the only ones around. These women are also famous for having the longest hair in the world, but they certainly charge you for showing it off, and so it sticked bound. Anyway…this spot was named “Nine dragons and five tigers” and we were trying to figure out where we would see these tigers. Here an attempt in which the long-haired woman guides James’ finger along the terraces and counts off the tigers. We didn’t succeed…it has something to do with the bends in the mountain along which the terraces are built. But we failed to see any single tiger or dragon. 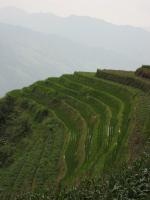 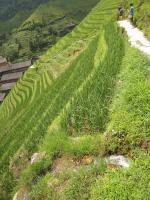 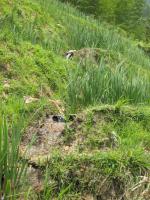 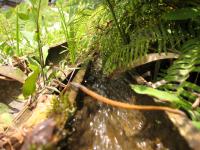 GL_20070721_134546.jpg: Instead, we contented ourselves by walking down-hill again via a different path. The long-haired woman had invited us to her villages for lunch, which was a place we orginally really wanted to see. But learning that it would take an hour just to get there (plus an hour getting back) led us to believe it would be too late. The driver expected us back by 4.

GL_20070721_134726.jpg: So we just returned slowly to the same village and descended. This picture might give an a bit exagerrated impression, but the terraces were partly really very steep.

GL_20070721_123914.jpg: Let me devote the last two pictures, difficult to see though, to the actual watering system of the terraces. Certainly simple in technology, but great in realization: The water flows down-hill from rivers leading down the mountains and jumps from terrace to terrace. You’ll find, when looking closely, four openings in this picture, where the water lowers to the next level. These openings are, however, not as I expected on the outer edges of each level, and the water does, hence, not flow through the entire level before falling down one step, but instead the openings are more or less one above the other, only one or two meters shifted against each other. So the water around the rice plants is actually fairly still, not much movement.

We had lunch at a hotel, which offered an English menu, but bad service. Went down again and got driven back to GuiLin through partly very heavy rain showers. Back there and after a shower we had a beer and dinner at a place at the corner of RenMin Lu and the main walking street, which advertises with a lot of Paulaner ads, but offers a huge collection of beer brands from all over the world, but a certain focus on Germany, presented in the menu like you would usually present expensive wines. They probably want to swim a bit on the Paulaner Bräuhaus wave, but they are by no means one. Food was mostly Pizza and Pasta, the Pizza great, the Pasta poor. Well…great beer, though! 😉

The next day, 22-JUL-2007, we set out by Li River cruise (for me the second time) down-river to YangShuo, from where I am writing these lines. I have already selected the pictures to be published, but the report will need to wait for another day…we just enjoyed the atmosphere of West Street again, had dinner and a beer…and I am now sitting with another beer in front of my splendid Morning Sun Hotel (the same as last time) and time is running towards midnight. Good night!

Today’s Lesson: Friends from the End of the World are just like Neighbours.