Yesterday’s visit to Paulaner Bräuhaus together with a friend proved to be necessary: I had lost a bit good German habits, like speaking German fluently, or cheering before starting to drink a beer instead of just taking it in by myself right away when served. The Chesse-Krainer weren’t so authentic, though. Hm…as far as I remember, maybe I’m wrong on my memory, too.

Gaudi’s Cosmos in the Museum of Contemporary Art (MoCA)

It got a long night, too long given the fact that I had barely slept the night before. But nevertheless, we agreed to meet at 10 in the morning to see the Gaudi exhibition, which I had by chance seen as an ad in the That’s Shanghai magazine. But it was hard not to note: There are ads plastered all over the city. And it is a very worthwhile exhibition, if you are a tiny bit interested in architecture. And it’s just 20 RMB! (not even 30, as reported earlier) 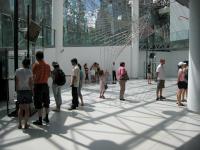 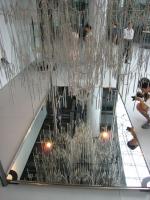 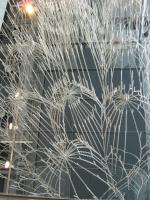 SH_20070825_103925.jpg: The main exhibition hall of the MoCA, right in the center of People’s Park, is a bright, light, high, and friendly room, leaving enough space also for larger exhibits. The people cluster around exhibits explaining the geometrical foundation for Gaudi’s roof constructions. The models on display often move a bit to demonstrate how to create the wave-like or round forms as you find them in almost all of Gaudi’s buildings.

SH_20070825_104749.jpg: There were a lot of mirrors around. The reason is that Gaudi had done many experiments before designing a building. And he had used chains with little weights on it to find the natural form of an arch, which has to support itself and some masses attached to it. If you then look at the simple experiment (use a necklace for a start) through a floor mirror, then the hanging chain becames a standing arch. And that’s exactly the form Gaudi then used in all his buildings, which is the most perfect and stable form archs can have.

SH_20070825_104805.jpg: The exhibit in the previous picture has a lot more chains hanging from above. Here now is what it looks like in a mirror: A lot of domes as you might find them atop a church, for example. (The 3-D effect is certainly better when watching it in reality, despite the fact that you look at a flat mirror.)

There was a model of the Cathedral of the Sagrada Familia, which also by the use of mirrors deducts the form of the building’s archs from hanging chains. Another focus was to explain by means of very instructive computer animations how the complex looking (often decorative) structures are to be derived by merging and twisting simple geographic objects like cubes or globes, and then match it to a part in a real building. A multi-media photo show completed the architectural part of the exhibition. 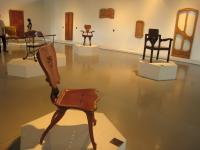 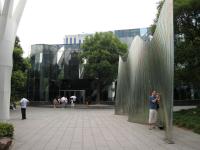 SH_20070825_115034.jpg: The upper floor had furniture and other interior design pieces on display. We didn’t find it too amazing but this is probably due to the fact that we are nowadays used to ergonomic chairs. In Gaudi’s times it must have been a novum.

SH_20070825_120652.jpg: Only when leaving the museum (after 1,5 hours!) we actually noticed and could explain this wave-like wall of steel pipes right in front of the entrance: It symbolizes the wall of the workshop building at the Segrada Familia site. Imagine…Gaudi built himself a workshop building to be able to work close to the site of the cathedral in progress [and it is still work in progress], and this workshop [sometimes referred to as ‘school’] is by itself a small design masterpiece! The roof is in a sinus wave form as are the walls. Difficult to fully explain this in pure words…so just believe me 😉 What you see in the picture is a wall of the workshop building, at the top it has the sinus-wave form, into which the roof fits.

After a quick lunch, an iced coffee (it is terribly hot in Shanghai), a 10-minute power-nap, and picking up my return flight ticket I continued alone now to the Shanghai Urban Planning Exhibition Center, at one corner of People Square. This museum always gets very good reviews and I now saw it actually even has a Chinese “AAAA” rating, the best possible tourist sight rating. And for good reasons, as I figured out:

The reception hall on the ground floor has a simplified model of Shanghai as it looks like now, but that’s not yet the ‘real’ thing…we come back to that. The real exhibition starts in the first floor. 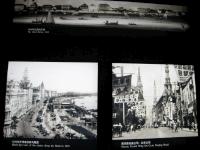 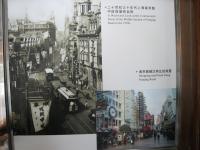 SH_20070825_153323.jpg: And is dedicated to Shanghai’s history, mentioned more than once that it has for a long time just been a small fishing village. The old pictures are a fantastic look back into the late 19. and early 20. century, a time by which Shanghai still looked entirely different from today.

SH_20070825_153939.jpg: Multiple sets of drawers compare old and modern Shanghai side by side, which already gives an idea of how much Shanghai has changed. But the best thing is actually a series of photos, shown on two LCD screens side by side, with an old picture on the left screen and a modern picturr on the right from the very same point of view (the pics in the drawers never match exactly). And the ‘old’ pictures have been made around 1985, just 22 years. It is a radical change, I can tell you. And fast. And actually, for some of the ‘modern’ photos I knew already what it looks like now, just 2 or 3 years later: Not rarely again different. 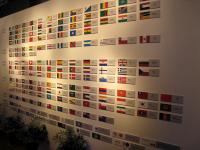 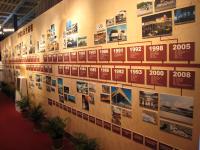 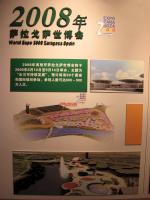 SH_20070825_160049.jpg: The third floor houses an exhibition on what Expo 2010 will look like. This one was mostly in Chinese only, which was a pitty, as there were a lot of projects worth explaining…general site layout, transportation, communication, plans for the future after 2010 and so on. Very nice and lavish animation on what the Expo site and Shanghai will look like in few years time, presented in a small cinema. Makes you love Shanghai and desire to stay there 😉

The picture shows the flags of the countries which have confirmed their attendance at the Expo. Certainly, Germany is in the list as are many, many European countries, some of which I don’t even recognize the national flags of. And in the Americas section the USA is still missing…how embarrassing. They eventually didn’t make it to Germany’s Expo 2000, although the site for their enormous pavillion was reserved (and in the end had to be left vacant). It seems for Shanghai they can’t even decide to sign up.

SH_20070825_160835.jpg: …that there will be an Expo 2008 in Zaragoza, Spain? I didn’t… Location of Chinese pavillion is marked in the poster above. There were quite a number of these posters also for past expos, including Hannover/Germany 2000. 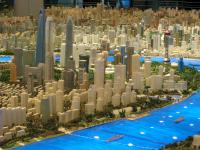 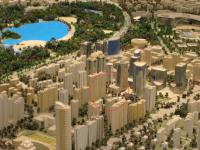 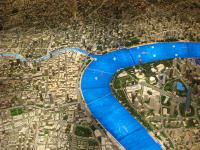 SH_20070825_161332.jpg: Here now finally the real thing on the fourth floor, which is what most visitors come for: The huge model of Shanghai, always looking a bit into the future, i.e. it contains buildings being constructed or planned. Here on the first picture, showing the well-known Pudong area facing directly the Bund, including Oriental Pearl Tower, Jin Mao Tower, you also see the World Financial Center (the tallest building with the hole at the very top), which is being constructed. I will check on its progress tomorrow during a Pudong tour.

SH_20070825_161723.jpg: Here the Pudong area where I lived for nearly 2 years. There’s a bug in the model…probably not the only one. The model is huge, maybe some 20m long and 10-15m wide. The bug is: Our appartment building is not there, instead there is a too large one at the position of a building, which is a bit smaller now, and at our place are only small 2/3 storey houses. See the area encircled in red. The surroundings are OK and recognizable, for example the Renaissance Hotel behind (top right area of circle cuts through it). And the building right next to the circle on the right-hand side is the one, which has been built while we were living next door, the noise waking us up (or its absence leaving me confused one Lunar-New-Year morning). The shape is not exactly what it looks like now, but there are some similarities. 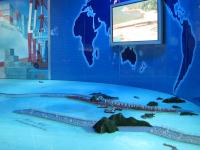 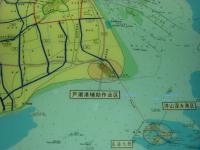 SH_20070825_164235.jpg: But mainly the fifth floor deals with plans for the future. I remember projects to revive the area along the Suzhou Creek, a project ongoing since 1995. A small model of current and future design of the Pudong International Airport, where I learned that beside the second terminal buildings, which is being built now, there are also plans for two additional satellite-terminals. They plan for a capacity of 100 million passengers a year. (Compare this to Frankfurt, which has a good 50 million passenger per year.)

But the project, which surprised and fascinated me most was the Yangshan Deep Water Port. I had heard of it before, but I thought it is a idea yet and located somewhere closeby Shanghai in the mouth of the Yangtse River. Both wrong, once decided the Chinese are faster than Germans can imagine: The port is being built as we speak. And it is no less than 35 kilometers into Hangzhou Bay. Which means: It is connected by a 35km long bridge. The picture shows a model of the actual port, which is to be built on reclaimed land around and atop some small rocky islands, which peek out of an otherwise deep sea. 15m water depth are no problem there at all. The screen in the background shows a very long movie taken from a helicopter on the current progress of the construction: The bridge is half-finished, all the other pillars peek out of the water already, the small islands are practically huge construction sites. Work is well underway…

SH_20070825_164828.jpg: And the port’s location in the sea: Shanghai proper is the irregular green circle in the top-left corner, the airport is the blue rectangular at the coast (top center), and the port is being built around the islands in the bottom-right corner of the picture. The line connecting it with the mainland is the 35km long bridge. 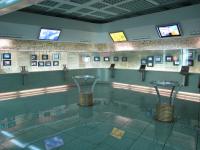 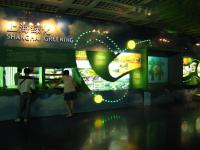 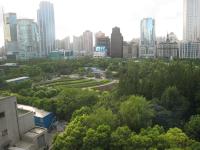 SH_20070825_165132.jpg: Other topics presented include plans for upgrding communications, introducing digital TV, and many many mentionings of…

SH_20070825_170007.jpg: ecological and environment-preservation project, transforming Shanghai into the “Eco City”. I’d love to see that happening. Also here work is underway and there’s no doubt that Shanghai has quite a bit of green around. But air polltion stays a problem and I didn’t really see a project which tackles air directly. There projects for water protection (also urgently needed) and generally waste management. But not much in the way of how to reduce the smog except for the introduction of the “Euro III” emission norm for new cars in 2006.

Simply mind-boggling how fast Shanghai had already developed and in which direction and with which speed government drives it into the future.

Today’s Lesson: Shanghai’s development is mind-boggling, both past and future.