That’s a huge game hall. I had not expected to learn many new things as I believe I am staying fairly much up-to-date on popular science. I just wanted to see how they present it. In the majority of the cases of the permanent exhibition you can’t really say it would be a ‘presentation’. The makers of this museum have taken a very playful approach, which by itself is nothing bad. In my eyes, though, the plays and games offered to experience a science or technology concept will not transport much knowledge about the concept as such. My best examples were right next to each other in the computer technology section: Pattern Matching and Olfactory Recognition (identify objects by smelling).

The game for pattern matching was played on a horizontally lying LCD, attached to a computer, showing a path through a forest with leaves and some insects. The job was to help a virtual beetle walk through this path in the woods, find food, and fight enemies. The kids had 3 shapes made from wood in their hands: If there was an enemy close to the beetle then you had to place your stone-shaped piece of wood between beetle and enemy to protect the beetle. When there was something to eat under a leaf then the kids placed their wood-leaf there to make the computer turn around the displayed leave. What has that to do with Pattern Matching, you might wonder? The computer recognized the pieces of wood laid on the LCD and acted upon them. But does now anyone understand how Pattern Matching works?

I was very keen on understanding how Olfactory Recognition works, have not heard much about it before. But all you could do was to hold one out of three different bottles under a giant nose protruding from the wall and the ‘nose’ tells you what it was that it smelled. No signs around explaining how that works…for all I know they could have just scanned a hidden bar code on the bottle or used RIDs… 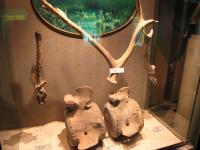 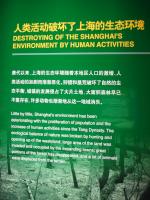 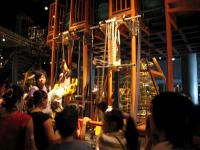 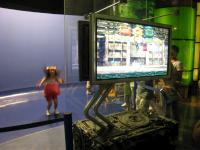 SH_20070826_114306.jpg: Did you know that long long long ago there were forests all over the place where Shanghai is now? Probably not too much of a surprise, but I had not thought about it either. But there were, and there was deer, too, like these bones proof. I like the idea of a ‘localization’ of a small part of the exhibition.

SH_20070826_114328.jpg: One of the probably 2 million texts in the museum, which only few people actually read. I show this one to document that Shanghai is in fact taking note of its heritage of environmental damage. Other texts next to it introduce some projects to work on environmental protection, pretty much in line with what has been said already in the Urban Planning Exhibition Center.

SH_20070826_115913.jpg: A room full of games to try, supposed to introduce kids to various technical concepts. Here, for example, to the concept of a pulley (German: Flaschenzug). Idea is good: The kids pull themselves up by pulling a rope, which runs through a pulley. The kids, however, turned that into kind of a turnament about who is fastest to the top. How much of the simple but useful concept of a pulley actually settled into their minds stays everybody’s guess. Just a very simple experimen would have been, in my eyes, more appropriate: 3 or 4 ropes, attached to the always same weight of 3 or 5kg, one without additional wheels, one with one set of additional wheels, and so on…so that you notice that 3 or 5kg is quite heavy if you try to lift it directly, but if are helped by a pulley with multiple wheels then things are a lot easier, but you need to pull more rope.

SH_20070826_121405.jpg: The rubbish-sorting game…lot’s of effort for very little effect: The girl in the background jumps up and down and left and right in front of a blue screen. A camera films her and puts her into the scenery you see on the TC screen (which is a tiny bit behind…on TV the girl is still up in the air), setting a background of rubbish sorting: Some stuff falling from the top needs to be kicked to the left, others to the right.

Why do we need a TV bluescreen concept for this? Why not just standing at the end of a belt and sorting real stuff (OK, cleaned cans and bottles, for example, which doesn’t stink any longer) with your own hands? (OK…protected by gloves) A lot simpler, easier to maintain, and a lot more tangible. 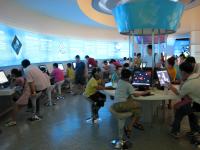 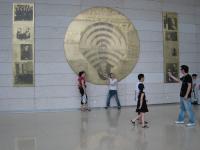 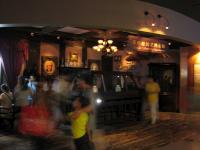 SH_20070826_121914.jpg: All the computer stuff was in Chinese, so I had no chance figuring out what it was about. Also, the computers were popular and all busy. I got the impression that most information was inteded to be transferred either by these computers or by movies. Each section of the museum had a small 20-40 people cinema, which showed an educative movie over and over. I peeked into two of them: Looked good, but again all Chinese and no English subtitles.

SH_20070826_123156.jpg: There was little room for the heros of science, the scientists who had found and described all what we see today. Their names, faces, and histories were pushed out into the huge halls and corridors and used mostly as a photo posing backdrop (here: Sir Isaac Newton).

SH_20070826_125937.jpg: Approaching yet another section of the museum I had the brief hope of now finally finding some real experiements in a nice setting. But its all about setting…not about experiments. You see here a recreated scienist’s workplace as it might have looked like at the times of Mendel (the one with the many peas for finding the rules of heredity) and Morgan, who is portrait here for having done with fruit flies what Mendel had done with peas, finding that the same set of rules apply to animals as they apply to plants. Under this nice transparent cover in the middle of the room is…no, not an experiment, not even the description of what I just relayed here. There were just a number of plastic fruit flies and a sign saying something in the line of “Fruit flies provided a great service to science”. If you wanted it more specific you had to read the text panels to both the left and right side of this room. What people were mostly busy with (and by chance my picture even shows it on its left-hand side) is sitting down at this ancient-looking desk in front of an old-style typewrite and having a photo made of oneself. Very instructive.

The temporary exhibition on spiders was quite a bit better. Only few games and those very simple, getting to the point (like how do the claws of different spider types work). Other than that many stuffed spiders and information panels with brief texts on the animals specials.

The Ocean Aquarium is also located in Pudong, right next to the Oriental Pearl Tower. Its admission fee of 120 RMB is not exactly cheap, but I understand that maintaining the aquariums costs time and money. And the museum was perfectly clean, modern, and well-maintained. Unlike the Technology Museum, where you easily loose orientation and aren’t sure where to go next or what you have not yet seen, the Ocean Aquarium has just one way through, which you simply have to follow (like IKEA ;)). I like that actually better. 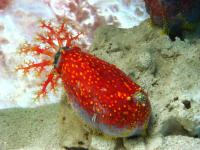 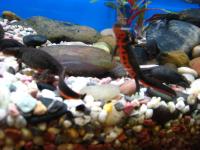 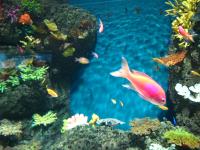 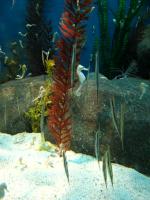 SH_20070826_150633.jpg: A Sea Apple (Chinese the same: 海苹果 ;), part of the temporary exhibition on toxic or otherwise hazardous sea creatures. For the Sea Apple the sign reads: “Release holothurin and holotoxin poison.” Good to know…and what is that…? More fascinating was its movement: These arms on the left in front of its mouth move slowly but one or the other is always on the move: The contract a bit and then are bent down into the mouth where everything edible is stripped off the arms, then they are put out in position again to collect edible remains from the surrounding water like plankton. A very simple and ancient life form.

SH_20070826_151736.jpg: These little creatures, amphibian in fact, are said to swim in the Yangtze River. Yet again a ‘localized’ temporary exhibition on animals in nearby Yangtze. And these were the most odd ones: Chinese Fire-Bellied Newt (Cynops orientalis).

SH_20070826_155402.jpg: There were sections for animals of various parts of the world, including penguins from Antarctica. These ones here are reef fishes I believe from Asia. The corals are fake, but the fishes are real.

SH_20070826_155621.jpg: This one you need to look at in detail: Then you’ll find lots of Sea Horses as well as these vertically swimming fishes I had seen during diving in Vietnam already. 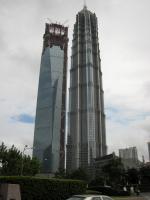 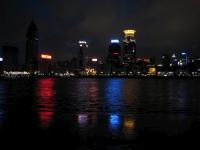 SH_20070826_134629.jpg: Update on the World Financial Center, the one which will end up with the big hole at the very top where there will be a viewing platform. Looks like constructions have reached the very top already, but still have to finalize it. The glass facade is 80% done, too, and there is light already in most of the floors.

SH_20070826_185337.jpg: Together with a friend I had a very good Sechuan-style dinner in Super Brand Mall, saw the finish of the Formula 1 race with a cup of Segafredo Espresso and finally ended the day at Paulaner at the river-side with a couple of beers, watching the city’s Puxi skyline across the river and solving weird mathematical problems like “How long will a container shippment of beer barrels to Paulaner last?”, involving a lot of educated guesses on container and barrel sizes [calculating the optimal radius/height relation for a minimum-surface-barrel] as well as people’s drinking habbits. We ended up with the astonishing high number of 55 days per container. And then thought that if placing barrels into the container then there is a lot of unsed space in the square formed by 4 barrels. And we decided to fill that with special-sized sauerkraut barrels. What diameter? 😉 and so on…the last unused spots we decided to fill up with mustard.

I will provide my sister with more details. I believe there were two or three elements in this mad calculation exercise (supported only by a pen and a simple mobile phone’s calculator, which just supports the 4 basic arithmetic operations), which are worth being asked to a school audience.

Well, yea…we are coming very close to the temporary end now. I just had lunch with another Shanghai friend, do my last updates here at Starbucks, will have a dinner and a massage later, and then fly out to Frankfurt, Germany.

No plans for Germany yet. Will need to get some things rolling there. Don’t expect many updates here in September.

Beginning of October I plan to return to Thailand, hopefully meeting some friends there for a fun week or two, before I fly to Buthan on 12-OCT from Bangkok, returning on 23-OCT.