Today focused on the ‘smaller’ temples in the North-East of Angkor Thom and Angkor Wat, as well as the older Roluos group, a bit to the East of Siem Reap.

Was apparently one of the larger temples. Lonely Planet: “The temple was dedicated to 515 devinities and during the course of the year 18 major festivals took place here, requiring a team of thousands just to maintain the place.” 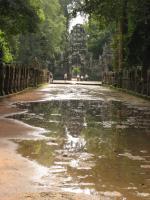 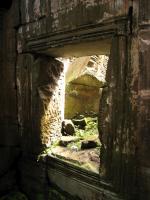 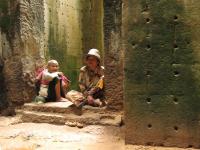 SR_20071008_092820.jpg: Way towards its West Gate. As said it had rained during the night. Today, however, was very sunny, despite the weather forecast being thunderstorms (not “chance of…”, but just “thunderstorms”). 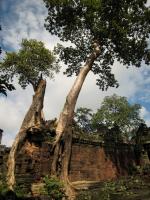 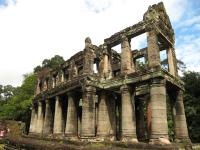 SR_20071008_095901.jpg: And now for something completely different…I beamed to Greek (and back). Hm…nobody knows, what this building was used for or why it looks Greek. No round coloumns at any other building. But it is undoubtly there.

While LP is quite fascinated I found it rather boring. Originally an island. Nowadays all dried up. And the ‘temple’ is more an arrangement of pools: A large middle one, whose water spills over into four smaller ones around. 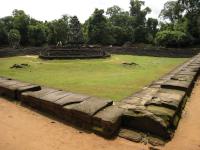 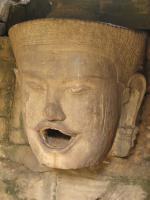 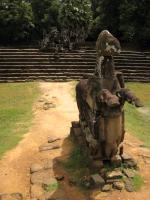 SR_20071008_104736.jpg: This is the spout through which the lower smaller pools are filled from the big one. The four spouts have different forms. Here a human faces. Others are said to have been elephant’s, horse’s, and lion’s heads. 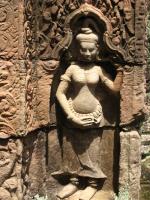 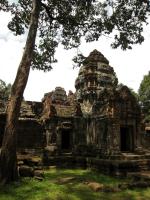 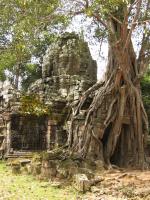 SR_20071008_112014.jpg: One of the smaller places. But still some nice figures, which in today’s sunlight (remember: forecasted as thunderstorms…I had no sun lotion with me) look great.

SR_20071008_112548.jpg: This is supposingly one of the most popular photos in Angkor, which I learned only later…maybe otherwise I would have paid more attention 😉 The Eastern Gate of Ta Som, overgrown by a large tree with many roots. 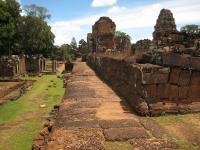 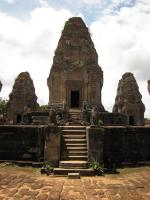 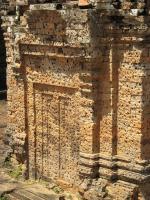 Then came lunch break at one of the small booths around the temples where my moto driver always waited for me. I used to buy at least a drink from them…that’s what they probably expect when housing my driver. At for lunch I ate there, too. I had a negotiation for half an hour about some stuff the daughter of the stall’s family wanted to sell me. (Don’t say what, ’cause in the end I bought it and it will be a present.) We had quite some fun, but she was also desperate…very few tourists around at the moment. Nonetheless, I could get the price down only a tiny bit. 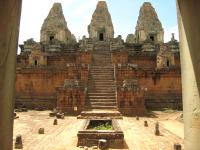 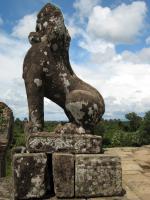 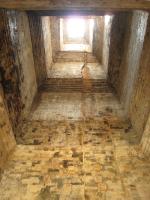 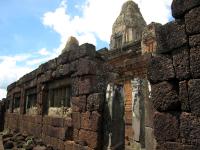 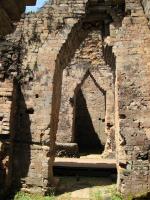 Getting there means half an hour drive. It’s really a different site around the city of Roluos. Has about a dozen temples or so of which three are usually tourist destinations. For those tourists getting there at all. And the first temple I skip here, quite small and nothing new. 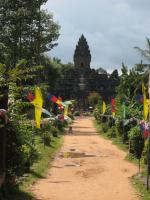 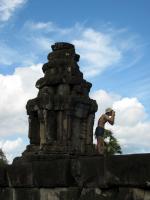 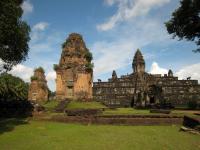 SR_20071008_141311.jpg: This guy does some very serious photos…and will have a very serious sunburn afterwards. He kept taking pictures from exactly there all the time I was on the upmost level.

SR_20071008_141935.jpg: Overview of the entire structure. It is yet another representation of the holy Mt Meru, which we were supposed to have seen yesterday already. But this time the five levels are clearly recognizable. Guarded by animals in all four corners. And then some brick towers around, which is surprising as the rest of the building is made from rock.

And then it occurs to you: There are no rooms within that temple. You can only walk to its top. No dressing rooms, function rooms, lifts…nothing, just solid rock. 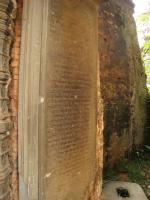 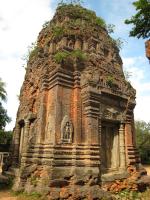 SR_20071008_144134.jpg: The last temple was quite similar to the first one, which I had skipped to document here, if not for this inscription. Well…I can’t read it. But to those with Sanscrit reading abilities it is still very clear.

At both Baking and Lolei I was approached by kids with a copied flyer, stamped with a red seal and every copy individually signed by a person: They basically both introduced new projects to help kids getting school education and asked for donations (“contributions”). These projects are definitely necessary and useful, no doubt. But why the hell am I received by a group of five kids at Bakong? (All in the same t-shirt and very friendly, not chasing, just handing over the flyer.) We tourists are chased by kids all day long and learn not to trust them. Why should we now suddenly trust these kids? I thought back and forth what to do and decided as follows: I wrote a note on the flyer stating my reasons not to give money (“don’t send your kids”) and returned this answer to the children, asking to forward it to the teacher or group leader or some responsible person, stating my mail address. On the second flyer I also added a note that they should probably join forces with the first group. Haven’t yet received a mail, what a pitty.

I spend some time reserving a hotel in Bangkok, then went out with another hotel guest for dinner and a couple of beers downtown. Quite some beers, actually. Which explains why this article is a day late. And we will go now again (it’s the next day, so we are hungry and thirsty again), which means that today’s pictures will come tomorrow only. I hopefully make it by tomorrow morning as I have until 11am before I will be picked up and brought to the airport for my flight to Bangkok.

Today’s Lesson: Don’t send your kids if you want to have money.