Arrival in Saigon was largely uneventful. The cheap Air France flight turned out to be a flight from Paris with stop-over in Bangkok. The only little hassle was to find a taxi, which we could only get from the departure level of the airport: There was a taxi stand…not at the arrival level. The taxi driver had some issues finding our hotel, though it was one of the better places in town (on the first night we played safe). But in the end everything was no hassle. Except for the temperatures…even the locals sweat like waterfalls and complain. There’s little rain these days, despite the calendar saying it’s raining season. 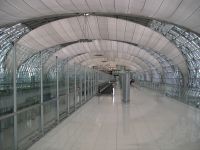 First: BKK – Bangkok International Airport, where we changed planes. We had to immigrate with a transit visum, fetch our luggage, then check in for our Air France flight, have a Starbucks coffee, and leave the country already agin.

Second: Captain of a speed ferry, supervising the docking maneuver

Third: Saigon River. The dark sky in the back never let any rain drop. It stayed hot and humid.

After arrival in Saigon and checking into our hotel we strolled along the river…well, as far as possible, given that even Saigon hasn’t yet fully appreciated the idea of walking promenades along rivers. After a short walk over the market (as short as it was: we came with four shoes and left with eight ;)) we had a very tasty Vietnamese dinner at one of the upper-class restaurants around the tourist area. An area I hadn’t visited before: The backpackers stay at “the other side”.

First: Traffic stayed as it was: Thick with motor bikes. The street-crossing strategy also stayed the same: Don’t look, just walk…the motor bikes will cruise around you. It needs some trusting, but it works.

Second: Except for where there are traffic lights…they are largely obeyed as by these ladies waiting for green to cross the street.

The one thing we wanted to see (for me: again) in Saigon was the Reunification Palace. It began as the Independence Palace and was renamed when North and South Vietnam were reunited after the war we know as the “Vietnam War”, with a signing ceremony in this very building. It’s architecture is…hm…memorable, but has won prices.

First: But what we keep liking is these old telephones. (You will need these pictures once your kids ask you nowadays “Mama/papa, why do say ‘hang up’?”)

Second: The pink one, for Nina.

Third: One of the architectural features of the palace are these columns of the sixties, here seen from the inside.

First: There are a number of reception rooms for various occasions. Foreign officials, local officials, handing out orders and the like. They have quite differently furniture and decorations.

Second: This one I particularly like: The Gambling Room.

First: Some of the more interesting features (though apparently not pictures as I didn’t select any) are in the bomb-safe underground floors. I have some pictures in my previous article on the palace.

Second: Back on the ground floor: The palace kitchen.

Third: Parked in front of the palace are two tanks of the type that had crushed through the fences on April 30., 1975, marking the end of the Vietnamese War. They aren’t the very same tanks as them had been moved back to Hanoi, but claimed to be the same type. I only remember one is Chinese made, the other Russion. What I particularly liked about these restored exhibits were the two red screws in each wheel.

After the palace we moved around without much of a plan, looked here and there, had a coffee (a western cappuchino in a western-style coffee house…) before returning to the hotel. There I had made the mistake of utilizing the “airport shuttle service”. It was offered for 6 USD, very roughly 120.000 Vietnamese Dong. Better than the 160.000 VND we had paid from the airport to the hotel. But…alas….per person, which makes a difference with two people.

Second: The well-known way of cable installations along the streets. I believe it is about telephone. Electricity wouldn’t require one wire per house.

First: Some unnamed colonial building, left to its own fate.

Second: An (apparently local) photographer near the People’s Committee Building.

The too expensive shuttle brought us savely to the domestic terminal of the airport, where we checked in and after some break boarded a Vietnam Airlines flight to DaNang. The first surprise was to be greeted by a native english speaking pilot (Nina believes him to be Australian by his accent). The second was to depart with a delay from the dock. The third was to stop in the middle of the apron with engines being shut down. “Some technical problem, to be solved in less than 20 minutes, but we require a technician to come on board and reboot one of our computers.” Great…”Reboot macht alles gut” as we like to put it in Germany. And so it was. The flight was eventually uneventful.

We had tried to contact our reserved hotel in HoiAn to organize for a pick-up from the airport. But it seems the number printed on the reservation was wrong. In the end we chose one of the taxi drivers approaching us and paid 260.000 VND for the good 30km to HoiAn, too tired to negotiate. But it was about fair anyway.

With the flight delay we arrived at the hotel after 9pm only, checked in, just had dinner at the hotel and fell into a sound sleep.

Today’s Lesson: “Per Person” is more expensive if you travel as a couple.