Along Laos’ highways are milestones marking the distance to the next places. The actual place may vary–the next village, or a major place further afar. When trying to make out the distance to Vientiane while on the bus I could never find “Vientiane” on the milestones…until one time we hat slowed down sufficiently for me to read one of the milestones saying “Capital City”. Apparently this is what Laos would like visitors to think of it. Reminds me of old pre-reunification signposts on Eastern Germany’s highways, reading “Berlin, Hauptstadt der DDR”.

We’ve planned two and a half days in Vientiane, fairly many given our generally tight schedule–it’s about as much as we had in Hanoi. We thought it would be worth it. It wasn’t. But there are good coffee bars…

Also Vientiane has some Wats. By far not as many as Luang Prabang, but there is one every once in a while. Of the first we saw I actually don’t even have photos…but it was a strange encounter anyway. Nina had found the possibility of a sauna and a massage being offered in a certain Wat. And that certainly sounded very promising after a 10 hour overnight bus ride. We got there (or actually to the German embassy across the street to try fooling the Tuk-tuk driver and get a lower price) by Tuk-tuk. But that Wat was more than tranquil: The setting amongst a number of trees was pittoresk, but the area by no means well maintained. Not a single tourist around. No signs in English, nothing pointing to a sauna or a massage. We walked around, were as always left alone by the few monks who wandered about. After we had decided we would return into the city and try one of the normal massage options we were finally approached by a dirty young man with a “sauna, massage” option. But we gave it a miss…he didn’t exactly look trustworthy and the place started to feel scary. 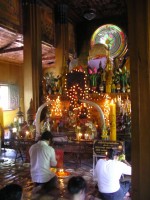 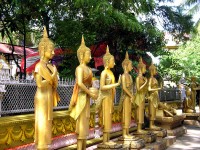 First: Our first photos are then from Wat Si Muang, which we visited on the way back into the city center. It is the place were the founding pillar of the city, lak meuang, is placed and worshipped. Hence it is the most active temple of Vientiane, which was apparent by the many local visitors as well as a number of ceremonies taking place around the sim, like something like a “car blessing”.

Second: Pray a wish and move this (apparently heavy, though heavily used) buddha above your head to let your wish come true. And if it comes true pray thanks to that pillar above.

Third: A row of different buddhas in front of the wat’s sim.

We drove back to the city and had a fabulous 1,5 hours massage at a massage center right across from our hotel. That was so relaxing that we had another one there the next day again 😉 And bought these massage handles with the Lao herbs to try it ourselves back at home.

Afterwards we had a brief walk in the immediate surroundings of the city center, trying to find Vientiane’s charme.

First: The Lao National Culture Hall, a monumental socialistic building, though one has to admit that the architects at least tried to give it an appealing character.

Second: As after a while nothing worthwhile came along I thought I just have to document what Vientiane looks like. Here you go.

First: The Mekong River again, here the border to Thailand (though most of the land you see on the far side is still Laos as it is a river island).

Second: Locals set up make-shift restaurants there and enjoy the sunset over some Beer Lao. In the background another unbelievable architectural sin: A conference hotel, probably built to host a certain South-East Asian summit. One of the tallest buildings in town, but built to impress, socialisticly ugly and spoiling the Mekong skyline.

Yea…yet another socialistic impressive-isn’t-it building: A museum for modern Laos’ founding father, Keysone Phomvihane. We atually came there in search for his former humble home, said to be a one-storey US-style farm house on a former CIA headquarter site. But apparently nobody has every heard of it. The Tuk-tuk driver brought us to the wrong museum first, the officials at the museum (which we didn’t even enter) had no clue either. There was something like an entrance to something, that could have formerly been a military site. We asked there, but the officials again, while friendly, couldn’t speak a word of English. But a passing-by motor bike driver pointed us another way, 800 meters along the perimeter of the military site. But also there we didn’t find neither entrance nor house and gave up.

Considered by LP the “most important national monument in Laos”, we certainly had to stop by Pha That Luang on the way back into the city.

First: It is a huge stupa and kind of a national symbol, appearing on various seals and other official places.

Second: Inside, the stairway to the second level around the stupe.

Third: Details of the decoration. The stupa has a turbulent history, once, on the peak of the kingdom, with golden decorations. Later abandoned, rebuilt by the French, who had to fix it ones more to have it look more original…what you see nowadays is probably only a bad copy of what it once was.

Second: And a naga, at a graveyard nearby.

First: Looking (likely consciously) a bit like the Paris Arc de Triomphe this tower once again tries to impress visitors. It does not have any specific purpose other than being representative. It is said to be built from concrete delivered by the US for renovation of airport runways, hence it’s also called Vertical Runway.

Second: Anything you need to know about the strucure is expressed in the English words on this sign in one of the archways: “At the northeastern end of LaneXang Ave. arises a huge structure resembling the Arc de Triomphe. It is the Patuxay or Victory Gate of Vientiane, built in 1962 (B.E 2505), but never complete due to the country’s turbulent history. From a closer distance, it appears even less impressive, like a monster of concrete. Nowadays this place is used as leisure ground for the people of Vientiane and the seventh floor on top of the building serves as excellent view point over the city.”

Third: The most glorific detail: The ceiling inbetween the four archways.

Fourth: View from the very top, looking north-east, out of the city.

First: The avenue from Patuxai into the city. At its far end you can already see…

Second: …the Presidential Palace (here seen from the back, ie. the Mekong promenade).

First: The market hall. Nina was deeply disappointed…no big food market, but mostly clothes and jewellery. And that not even presented well.

Second: Another addition to the collection of badly looking buildings. Should be added that most, if not all of these architectural sins were for govermental organizations. I believe here it’s Laos Telekom. Private institutes, like banks, had a lot more beautiful and representative buildings.

…is nowadays named a museum and does not seem to be used actively any longer. It is located right next to the Presidential Palace and is the only wat remaining in about its original shape through the wars.

First: And you could feel a sent of that authentic atmosphere when walking through that wat. Here a collection of buddhas along the surrounding walkways.

Second: The site, with the sim in the center. Within the sim photography was not allowed.

Third: Another detail of the surrounding walkways.

With that we mostly gave up trying to find Vientiane’s beauty. It had been a long hot day again, we noticed we got some more skin color still, and retired to one of the cafes. Only in kind of an afterthought, before taking a shower and having the second massage, we ticked off two more wats, of which the following two photos bear witness:

First: Houses along Th Setthathirat, with Wat Hai Sok in the background.

After the massage we had another coffee, now already sorting photos and hacking articles into my laptop. On our last evening we treated ourselve to a splendid dinner in one of the many excellent French restaurants, having dressed as good as we could, and relying on our golden credit cards (of which at least mine eventually also worked ;))

Our last morning in Vientiane (flight to Bangkok was scheduled for 16:30) we again spent in a cafe. We had no idea what to look at and were tired walking around. Some more articles and photos awaited writing and sorting, while Nina worked through her second book.

We had this one backup day in Bangkok, which we (ie. Nina) used for shopping. I was looking very much forward to be parked in a Starbucks cafe while Nina strolled through the thousands of shopping possibilities in Bangkok’s shopping centers. I think I faintly remember having written here two years ago something about the temperature in these modern shopping malls, hadn’t I? If not it needs to be written…the place was so freezing cold that also three cappucchinos could not warm me up. The internet connection did also not work as great as I wanted (couldn’t upload photos with Flickr’s Uploadr tool), additionally cooling down my mood. Only when my bare feet started to turn blue Nina finally released me from my self-chosen misery after three hours. Next time I probably accompany her for shopping. She at least was successful with armloads of skirts.

These lines I’m writing already on the AirBerlin flight back to Germany, which is scheduled to arrive half an hour early. We enjoyed the experiences very much. But also: We are looking forward to a fixed home again, in which we don’t need to pack things every other day.

Today’s Lesson: Vientiane can be compressed into one day.