Wanted to see what it now looks like where I had lived some years ago. So I headed for Pudong, exiting the Metro at LuJiaZui, i.e. in the shadow of the tallest towers and all the fininancial high rises. Difficult to say if there are more of them now than back in 2007 😉 But the still very educating collection of yearly fish-eye photos from the top of Oriental Pearl Tower, which are arranged and displayed under the sail-like tent in the LuJiaZui Park told me: There are! But in fact…I wasn’t so much interested in them in detail. I walked around to check out the details.

Left: I’ve been told more than once that China is carrying its land population to Shanghai for seeing the Expo. I can well imagine that this elderly couple is from somewhere far away. They pose for a photo with the Oriental Pearl TV Tower in the background, an extremely popular portrait backdrop. I did my portrait as a hip shot in front of the Bank of China building, not wanting to distract them from this serious business. The lady specifically took on this black jacket for the photo, and afterwards put if off again. It’s kinda hot here these days.

Center: The little park in Pudong next to Jin Mao has always been a favorite wedding photo location (some things never change). But at least: Wedding couples seem to travel by individual car now, no longer by bus. (Remember I’ve nearly been hit by a wedding photo bus in BeiJing? 😉 One change I noted: The Vietnamese restaurant at the lake is gone unfortunately, I liked it very much. Weird…it was often full. The place is now occupied by some cheap Chinese eaterie with too loud music.

Right: At that park exit (across from Jin Mao) there’s now a pedestrian bridge across the street. The street, which is the one you see in this photo, is going into yet another tunnel. Probably under HuangPu River? Don’t know…maybe it only passes some streets and/or buildings underground. But it became a four lane road and hence might warrant this pedestrian bridge at times. Not now…it’s empty…save for these two workers watering the green.

Left: That Bottle Opener in the background, the World Financial Center, is designed and financed by Japanese. Its design had been changed last minute: That hole in the top was supposed to be a circle. But there were fears that its shadow casted on Chinese soil would, due to the circular hole, look like a Japanese flag and the entire building like a sword. To avoid this perceived sign of occupation the circle was changed for the current rectangle, which makes the entire thing look like a bottle opener.

Center: Good Ole Jin Mao…don’t you worry, in my eyes you’re still the most beautiful skyscraper in Shanghai!

Right: Bottle Opener Drop Off 😉 Ok, ok, that title is slightly insulting. But as a matter of fact, the World Financial Center is the new tourist magnet. The tower has a separate outside entry for the observatories on 94., 97., and 100. floor, a group bus drop off lane, and fixed fences to separate group tours from each other in the waiting area. The entire design tells you: I’m the tallest, the tourist groups are mine now! And Good Ole Jin Mao can only stand still, mirror itself in the facade to try to catch attention, and watch the people move on.

On the lower floors there are a few shops, cafes, and restaurants, certainly many of them Japanese restaurants. I’m sure if you are looking for authentic Japanese cuisine you might be right here. But today, probably due to the holidays, everything was fairly empty. It might fill up once offices are staffed. Nonetheless, I had a coffee and a sandwich there for a break. And not at Starbucks! Not that the center doesn’t have one…but it’s located somewhat off the rest in a corner of the ground floor, not too cozy. 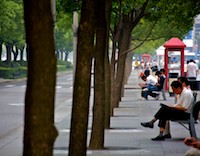 Center: This photo looks like there are a lot of people (as one would expect in Shanghai). But as a matter of fact this is only an effect of the long focal length: Beyond World Financial Center there was next to nobody any longer. And even around Jin Mao / World Financial Center there were only few people. The Chinese still favor Oriental Pearl Tower, which I find rather ugly.

Right: Not sure if this oh so beautiful building was already there 3 years ago. But it seems the construction style for Chinese owned designs stays pretty much the same…the collection of colorful cars waiting at the traffic light just by coincidence adds to the effect 😉

I strolled along Century Avenue heading out of town towards my old “home” location. I came across fewer and fewer people and changes, and finally decided to go the last kilometers again by subway.

Left: The Century Avenue Station had already been closed for construction when I was still there in 2007. Now it boasts no less than 4 different subway lines. And this really means 4 different tracks meeting here, not just lines splitting up somewhere later! Good old line 2 goes from down-town now all the way out to Pudong airport. Line 4 is a complete circle around down-town, line 6 heads out to Wai Gao Qiao (were I was working, would have loved this one to be available 3 years ago!) and line 9 ends one stop further out on YangGao ZhongLu, not far away from my old appartment. (I would take this line 9 back to my hotel afterwards.)

Also new is the fact the some of the new stations (by far not all of them!) cater for mobility impaired people. Some things do change.

Some other not: The English translation is still awful 😉

Right: Another attempt of subway user education: These ladies, to be seen at several busy escalators, try to enlighten people that standing on the right hand side would allow others with bags to run past them, or into them…that’s not quite clear 😉

I got off at the Technology Museum station like when living there and walked the same way to my old appartment site, taking in the big and small changes along the way. There were a few, but none exactly dramatic. One building along the way, which was a huge construction site, was finished, but started its decay already while still being empty. Another building, closer to my appartment next to the Rennaisance hotel was now finally being used after standing empty all the time I lived there. Seemingly a hotel, but the Chinese style, not so obvious 😉 Nothing significant changed around my actual appartment compound. The years left their marks on the buildings of the compound and the surrounding shops and restaurant places. Surprise, surprise, even the Sports Bar where I watched a few soccer games of the 2006 World Championships in Germany was still there. OK…no guest by that time, but it was open and operated still under the same name.

I moved on towards Thumb Plaza. The plaza across from Thumb Plaza is finished, named Laya Plaza, if I remember correctly. Nothing really fancy…but considered good enough to be connected to the Thumb Plaza side by a new pedestrian bridge, from which I made the following photo on the left:

Left: I have a lot more photos from the area I lived in for nearly 2 years. But they are interesting only for a few I’d guess 😉 Here nothing much has changed except maybe the footbridge I’m standing on right now. Otherwise it’s still a busy square, my Starbucks is also still there but no longer recognizes me and offers me a Mokka when I ordered a Cappucchino 🙁 Seems my time is over here.

Right: I knew this church is there (at the end of Thumb Plaza), but due to constructions I never had as clear a view on it. It’s still kinda strange a sight, this Christian church.

I walked past the other side of my old appartment compound and checked out the new subway station YangGao ZhongLu for line 9. Along the way two office buildings were finished, which were still being constructed when I left. Ah…nearly forgot to mention that the building right next to my appartment causing a constant construction noise, was certainly also finished and seems to be more or less fully booked with offices. The brand-new line 9 brought me all the way to the other side of down-town, nearly home (only had to change once at YiShan Lu for line 3).

It was probably a very good deed doing this little walking tour. I must admit that at times I longed back to the life in that part of Shanghai for its easiness. But to be honest…and if nothing else told me then it was the Mokka at my previous “home” Starbucks: I know now that I no longer belong there. It was a great time, but now I can finally check it off!