…all I remember from my Lonely Planet about it is something to the line of “there’s nothing to see in KunMing proper”. Well, I sent my LP home already in the package from YangShuo, so I don’t have it anyway. And all I wanted to do in KunMing was to see the Stone Forest, which got quite some praise from various people, last from Rita and James.

Yesterday I just lazely waited away the morning in YangShuo’s cafes, bought another shorts in anticipation of Vietnam’s hot weather, then got via taxi and plane to KunMing, easy going. There via public bus to the Hump Hostel, which indeed is a nice and central place to be, but the negative comments on the web booking sites are also true: Lot’s of bars around. You will find the provided ear plugs useful…my second night only in China with ear plugs (the first was somewhen back in Shanghai in my appartment and I don’t remember what was happening outside…likely the construction site nearby).

According to what the reception people told me I had to get on a bus from the long distance bus station to the Stone Forest. It would be an 2-hour ride. Uups…hadn’t expected to be that far out. Good that I didn’t try during my KunMing aiport layover a few days ago. The airport is actually inside the city.

Around the train station are three different long distance bus stations and it took me a while to find the right place where I paid 100 RMB to get on a 20-seater full of Chinese. It started off fairly well except for the diver trying hard to avoid any kind of street toll booth, once even taking a detour over a village market, just to get around it. Weird… 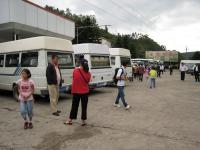 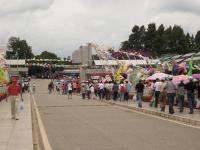 KM_20070728_104458.jpg: Unavoidable on any Chinese tourist bus: A stop-over at a Jade shop halfway. I kind of expected it to happen and didn’t even enter the shop. But it means a break of at least 20 minutes.

KM_20070728_113857.jpg: After another half an hour ride over partly really bad roads (with the highway running in parallel always in sight…but no way to get on it if you try avoiding street toll) we reached this temple. Ey, what? I paid to get to the Stone Forest…now I got a bit impatient and ask both driver and guide when we would finally arrive at the Stone Forest. The driver told me something about having a rest blabla…but didn’t come up with a time. The guide lady was smarter: Instead of answering me she stopped another bus just leaving the place and put me on that bus. Great! So I avoided this temple and got faster to the Stone Forest.

KM_20070728_124321.jpg: Stone Forest entrance…as you see: Yet another hour later. All in all it was 3 hours to get there. On the bus I met a French couple. They said they were on the bus since 9am (while I stated half an hour later, so the temple takes at least another half hour). On the way back later they asked if it would always be like that on Chinese tours. Well, guys…get used to it…it is always like that!

Just now, while sitting in the hostel trying to update my site, I got in talks with 2 Australians. They were considering, too, to see the forest. One of them walked up to the very same hostel reception where I have been yesterday and came back with the information that there would be a direct non-stop bus for 41 RMB one way! Grrrrrrr….why do I pay 100 RMB (return) for this detour-bus on recommendation of obviously another person, but same reception???

…costs a whopping 140 RMB admission fee! (Which made aforementioned Australians decide not to see it.) I find that overpriced compared to other Chinese destinations. But once there…what would you do? 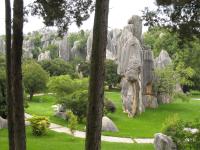 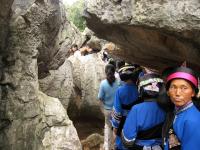 KM_20070728_125218.jpg: At least you get bi-lingual signs (maps even additionally include French!), which explain also a bit the background of all these stones. Here we learn that the word “Karst” is of German origin, which I found is worth a picture.

KM_20070728_125411.jpg: The park area started off with some landscaped areas. Nice, but a bit on the artificial side, although the stones are certainly all real.

KM_20070728_125907.jpg: But even in the main area there are a few narrow paths through the stones, which are worthwhile taking. Here are, just by pure chance, a few minority people in front of me. I guess they have been invited to perform dances and during a break venture about in the vicinity. 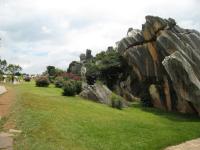 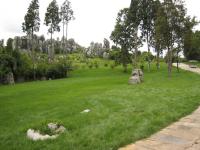 KM_20070728_131150.jpg: And then, deeper inside, finally only pure rocks. The partly quite amazing views are difficult to catch with a small camera. 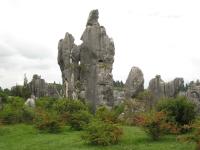 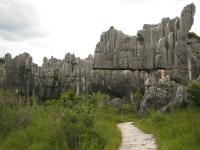 KM_20070728_133729.jpg: The really interesting part started anyway far out, outside the ring road in the back, so I remembered Rita and James saying. They were talking about all the funny names the rocks have gotten. I must admit I did not find half as many as they had earlier, but this one is supposingly somthing like “Mother playing with Child” or something to that meaning.

KM_20070728_134736.jpg: After the mother I headed out into the remote areas. Still paved ways, but no people any longer. And is that rock in the back not again a mother with a child…? I took a series of self-pictures using my cool tripod, trying to imitate Chinese poses…sorry…I am not good at that 😉

KM_20070728_135146.jpg: The ways out there were really interesting. Sometimes through the open, to take up the scenery, sometimes through such narrow cracks. In this particular one I nearly got stuck with my daypack 😉

KM_20070728_135359.jpg: This picture I made to point out an interesting horizontal line across the rocks, which actually continues further even outside this picture: There is a small horizontal crack in the same height in all rocks, though the rocks are not connected to each other directly. How could that be? It is too sharp to be formed by water. 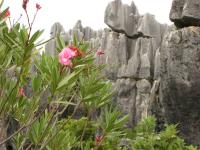 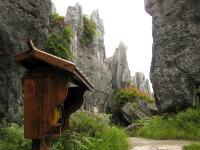 KM_20070728_135425.jpg: On my last day in China I started doing flower pictures…I need to get out of this country…it influences me too much…Chinese do flower photos…not Germans… 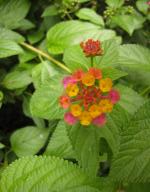 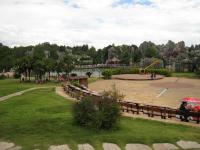 All in all a worthwhile trip, though lengthy and expensive. Our bus (we had to stick to the same bus on this tour while the 41 RMB option above would be flexible) left at 15:30. And through heavy rain. Some drops had fallen already throughout the day, but never bad. Now it did get bad. Good timing. Some ways would have been quite slippery if wet.

All went well until arrival in KunMing, when the bus finally stopped at some kind of market. I don’t believe it…yet another stopover so briefly before reaching home! Well, there were already taxis around. I fetched the French couple and left the bus tour by taxi home. While stuck in the rush hour traffic they asked me lots of stuff about what to do in China. Felt good to be regarded as an expert now. Unbelievable…they had skipped YangShuo because Lonely Planet said it would be dangerous/unsafe there! As said…I sent my LP home already, but I just could glance into another traveller’s copy: It just says that at Moon Hill there had been reports of two robberies. I was there…the most dangerous thing there are old lady hawkers trying to sell you drinks. 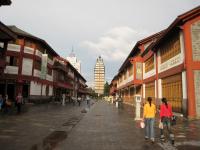 VisaApproval.gif: I had received my Vietnam-Visa approval letter, a badly faxed 3-page document in Vietnamese/English, basically stating that a couple of people can get a visa on arrival, followed by a list of these people. So I now have a list of names, nationalities and passport numbers of 13 other people…I happen to be the last one on that list. And I needed to print these 3 pages for check-in and visa-processing purposes. So I had to find a shop doing that for me. Yesterday I was unsuccessful, today I found the correct street and came across 3 shops: One could not read PDF, one said it could not, but I saw the correct icon being displayed, double-clicked it, and all displayed and printed wonderful: for just 1.5 RMB, laughable! The third shop I saw only on the way back. You need to hit the right streets in China…

Back here at the hostel, as said already, I had a talk with some Australians just arrived from Vietnam via land border close to Sapa. That is adventurous! Again, they praised Sapa and didn’t leave any good on Hanoi. Kind of coherent from various parties. Well…I have to start in Hanoi anyway. And Sapa would then be a long detour up into the north mountains. Will see how it works out and if I do it. Though I love mountains I have now had quite many of them.

In return I gave them a lot of tips on China, especially Tiger Leaping Gorge and Tibet. Well…compare that to my first hostel talks in QingDao, where I was the newbie and admired the experience of all the others at the table… 😉

That is the end of my China tour! Tomorrow I pack my stuff again and board a plane to Hanoi, Vietnam.

Note: Vietnam time is one hour behind China, though I am flying straight south I ‘win’ an hour.

Today’s Lesson: Now I am considered a China-Expert 😉