Flying out of KunMing yesterday was no big hassle, though during check-in they wanted to have an own copy of my Visa-on-arrival-approval letter. Well…they copied it then themselves. Approaching Hanoi the first glances on Vietnam from a bird’s perspective did not look much different from China. As expected. Just a bit greener. And for a long time I was searching in vain for actual Hanoi city out of my plane window. I saw a runway beneath us and knew that the airport is some 30km off Hanoi city. But while circling over the airport I had expected to see something…only shortly before touchdown I made out the big advertisements along a street and then knew in which direction to look: Along the ads I saw some very few high-rises in the far back. And no air polution. And that made the major difference: Everything is a bit greener, a bit more colorful. Already from the plane I saw that quite some houses, though small and structurally not much different from Chinese houses, are in better shape, better maintained, some freshly painted in bright colors.

Hanoi International Airport is actually a good joke: One runway, maybe 4 gates for international flights plus some for domestic flights, just 2 luggage belts, but some 20 immigration counters. Well…at least processing would then be fast, I thought. And for those having a visa it was fast. But for those like me hoping for a visa-on-arrival, it was slow. Very slow in fact. I was aware I had to get the visa before approaching immigration, but couldn’t find any counter offering visa-on-arrival. So I approached immigration nonetheless, was guided away to the right counter somewhere in a back corner with only a small sign atop an office counter. Next to impossible to find by yourself. I had to fill in a visa-apply form, fine. Provide a passport photo, also fine, I knew upfront. And then an officer went away with my passport an my printed faxed visa approval letter. Came back some 10 minutes later, telling me friendly but in bad English that he wants to see the original of the approval letter. Great…I don’t have that…the agency only had it. Between the lines I heard something like my name doesn’t appear in the computer system. That would indeed be bad. I shall call my agency and get the original. Haha…try that on a Sunday afternoon. I called my Guest House telling my arrival is delayed and they should inform the waiting driver. An Italian lady shared the same fater with me (also had a copy of the letter only) and we talked away another half an hour waiting time, trying to encourage each other. After some time an officer came back with both our passports, visa in there, pay 25 USD (that I also knew upfront) and everything’s fine. Don’t ask questions…immigration then was no hassle…but getting my backpack certainly, as the luggage belt had long stopped. I had to pick it up from the lost-luggage counter, but no big deal. Finally out. (I now only notice: I somehow just skipped customs declaration…well…nobody stopped me.)

I tried 3 ATMs at the airport with both my bank and my VISA card, but in vain: All machines said that processing failed due to “device failure”…whatever that means. But I didn’t feel great not having a single Vietnamese Dong in my wallet. I found my driver and was brought in a half hour driver into Hanoi’s Old Quater to my budget guest house. Uups…very budget…if you don’t know where it is you won’t find it. The street is OK, but the house is reachable only through a small lane between other houses, not a meter wide, with other house entrances going off to the left (out of one constantly water dripples, so the floor is there wet and slippery). But finally in I was greeted very friendly by a young lady, got a beer first, talked to an Austrian sitting at the only internet computer (he went off south that very evening), before finally being shown to my room, up three floors on a steep stairway. The room itself surprisingly big with a double and a single bed, bathroom also large and clean with bath tub. That’s all great.

Both the Austrian and the guest house lady recommended the same restaurant for the first evening, I got some US dollar exchanged for Dong by my guest house, found the restaurant, had a good dinner trying to pick some Vietnamese food from the western/local mixed menu, drank more local draft beer, started feeling a bit dizzy with all the beer, rounded the dinner off with a coffee. Vietnamese coffee is said to be good and strong; strong it was, but the good ones I found only the next day. But then when paying the waitress said her boss wants to invite me for another beer…ahhh…you can’t refuse that…so I left only after one more beer, and a bit more dizzy. The boss was actually another lady, who did not drink together with me…and drinking alone is said to make fat… 😉

Had a walk around the block in the attempt to get a clear head again, hit roads full of motorcycles and luckily remembered what Lonely Planet says about Hanoi traffic: “If you don’t want to wind up like a bug on a windshield…[Running quickly] does not always work, and could get you creamed. Most Vietnamese cross the street slowly – very slowly – giving the motorbike drivers sufficient time to judge their position so they can pass on either side. They won’t stop or even slow down, but they will try to avoid hitting you. Just don’t make any sudden moves. Good luck!” (LP Vietnam, 2005, p484) I love my Lonely Planet…clear and honest…just the prayer before crossing a street and the thank-you-amen down on your knees after reaching the far side is missing. But it was probably life-saving for me. Indeed the best way is to close your eyes and walk slowly…you just don’t want to know how many bikes are out there.

Should probably be added that also traffic lights seem to mostly fullfill a decorative purpose, harmonizing quite well in color and traffic control functionality with the police officers dozing nearby. It might occasionally happen that a four wheeled vehicle stops in front of a red traffic light, but that might at the same time also be just coincidental.

Only today I took the camera with me and explored the Old Quarter on feet, despite probably 2000 offers of bike and motorcycle drivers to pick me up. That will need to wait until tomorrow. 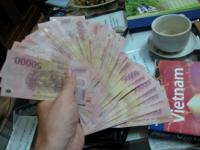 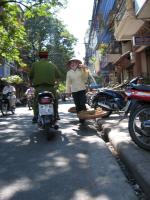 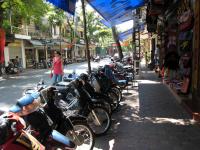 In the morning already I picked and booked two trips, one to Sapa, one to Halong Bay, both via my Guest House. Understandably they wanted to see a bit of money for it. Not much, though…In total I pay for something like 6 days full program, inclusive partly long transportation (like 2 night trains), accomodation, food, guide, something like 130 EUR. It can’t get any cheaper than that. And it would be foolish not to use the package options. Even Lonely Planet say so. Only hard-core backpackers do these trips on their own, likely ending up paying more.

HN_20070730_094746.jpg: Here a rare occasion in Hanoi’s Old Quarter: A sidewalk so big that there is still room for pedestrians. Usually it is entirely occupied by parked motorcycles, forcing pedestrians on the street. 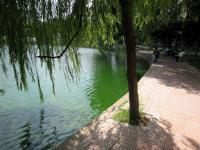 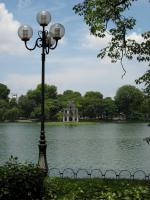 HN_20070730_113137.jpg: I have actually not figured out who the statue in the back represents. Maybe Uncle Ho, but based on the few characters I thought I could identify I think that unlikely. And risky my life by crossing the street did not look worthwhile. 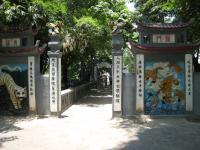 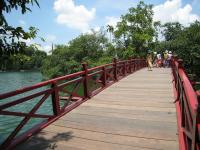 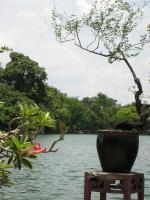 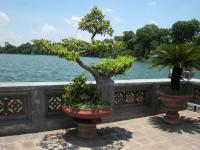 (I am not doing flower pictures again, do I???) 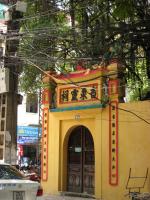 HN_20070730_122005.jpg: Starting from that temple island I followed a walking tour suggested by Lonely Planet (later short-cut some parts, though), which led through various streets with lots of vendors. Here just a general impression what a Hanoi Old Quater street looks like. One good thing are the many large trees around, shadow the otherwise merciless sun. Generally speaking, though, I can stand the Hanoi weather here a lot better than the Chinese weather. It appears less humid, though god only knows why that is.

HN_20070730_122352.jpg: You saw it on the island entrance already, and every once in a while you come across Chinese characters also in the streets. They are often, like here, well painted and clearly visible. They are always traditional, that I can say for sure. I even believe that they are mostly, if not always, written right-to-left, i.e. in traditional writing order, indicating a long history. But that I am not 100% sure as I can rarely read more than one or two characters of the gate inscriptions.

HN_20070730_123520.jpg: Uups…90 minutes since the last coffee, urgently time for a break. A view out of a small restaurant on Pho Hang, where I had some pork/vegetable rice dish for lunch. 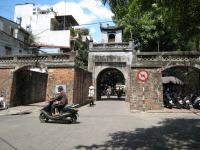 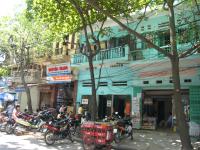 HN_20070730_132103.jpg: A remainder of the old city wall. On the other side a traditional right-to-left Chinese inscription reads “門河東”, meaning “East River Gate”. Makes sense…it’s in the east of the old city and faces the river Song Hong 😉

Oh…did I mention that my little Chinese knowledge was even of use here, even beyond reading some simple inscriptions? The young lady looking after the guest house is learning Chinese and I had actually exchanged some Chinese phrases with her, me being the teacher ;)) seems she will try that more often. Got greeted in Chinese while returning briefly for picking up my laptop. 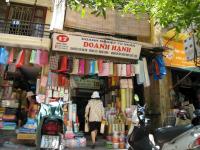 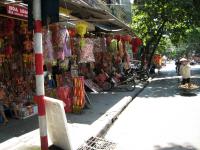 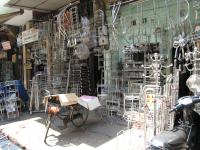 HN_20070730_132401.jpg: I had learned that the streets I wandered through where named after the goods that have been sold there in ancient times. No longer applies today, but still one street mostly sells one kind of stuff and for another you need to head for another street. Here are shops selling all kinds of tape material like Scotch tape. 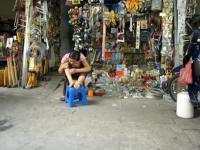 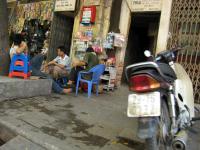 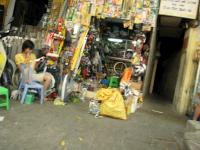 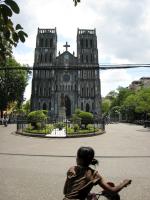 HN_20070730_134943.jpg: And now for something completely different…but I don’t know what it is. In the foreground I by chance catched one of the ubiquitous rickshaws.

HN_20070730_135137.jpg: Also completely different: St Joseph Cathedral. In urgent need for a repaint. But closed. Only later I found in LP that you can ring and ask the priest to let you into the cathedral. Eh…not my kind of stuff. BTW: It’s next to impossible to get rid of the overhead cables in such pictures. They are simply everywhere. 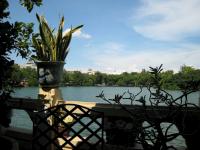 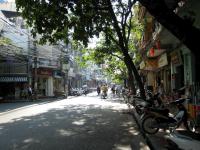 HN_20070730_141215.jpg: Time for a coffee, isn’t it? And here only I got the real thing: A coffee cup with the coffee powder in a metal filter, water still drippling through into the cup. Oh…that is strong 😉 Had to calm myself down with a local beer afterwards. Luckily the Vietnamese drink beer at all times of the day.

I brought back my books I carried all the time in a plastic shopping bag (LP has lots of warnings about how things dangling from your hands can be snatched and stolen…nothing happened all day so far), fetched my

notebook, tried to get straight to one of the two cafes with wireless LAN access, ran in completely wrong directions, found the way only half an hour later, and here I am! 😉

OK…that cafe, Hapro, has now hosted me for some while over just one coffee (but no drippling filter delivered, just the ready cup) and a quite good piece of apple cake, so I honor their patience with having dinner here and now. Then, when the internet stuff is finished, I might make some night shots. You’ll see tomorrow…or the day after. CU!

One thought on “Hanoi (I) Old Quarter”