Trekking was the part of the Bhutan trip I was looking most forward to. The cultural part reliably proved to be highly influenced by Bhuddism and is in its essence not so much different from Tibet. But in Lhasa I barely left the city proper. Here now I was supposed to walk six days, five nights, over and through Buthan’s mountains at the south-eastern edge of the Himalaya Mountains.

The trek started fairly near our hotel, next to the National Museum of Paro. When we arrived the team, consisting of a camp organizer, a cook, and a horseman, was there already together with six horses, ponys, and mules, as well as all supplies. We were introduced, but otherwise had certainly nothing to do with the preparations and pretty quickly started the actual hike with Ratnar, our guide, guiding us. Well…what else is a guide supposed to do… 😉 The others were left to themselves. And so it stayed through most days: We started with Ratnar before the horses started, but were overtaken by them somewhere during the hike. During the last days this overtaking took place fairly late, not far before reaching the next camp. But it was essential to be passed: The camp organizer, coming together with the horses, always had the prepared lunch in his backpack. 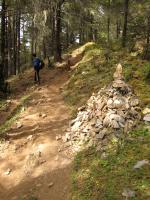 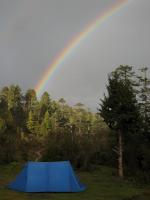 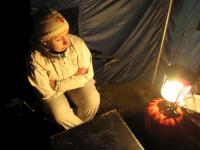 DP_20071015_163606.jpg: As soon as we reached the camp it started to rain. The camp was up and ready when we arrived: One tent for Eleanor (which happens to be the one pictured here), one for me, one cooking tent, one dining tent (these two used by the team for sleeping), and a toilet tent. The rain forced us into the dining tent where tea and a snack was served. But with the sun coming out the weather produced a wonderful rainbow.

A German travelling alone, Tanja, passed by to say Hello. That Hello extended to quite a long conversation, ended only when dinner was served.

In the morning Eleanor decided to not continue the trek due to an increasingly aching back. That would leave me alone with the four people team. I had hopes to team up with Tanja, the German we met yesterday. But she was on the way already before we finished breakfast. Ratnar decended with Eleanor back to Paro. I was guided by the camp organizer to Jele Dzong, just up the hill above our camp. There we met the horses and until lunch time I just followed them. It was actually quite interesting to watch the horses and how the horseman dealed with them. The horses certainly mostly found their way themselves. They just sometimes needed to be ‘motivated’ to keep on going. 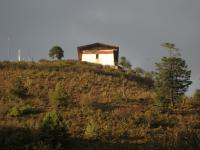 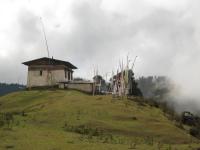 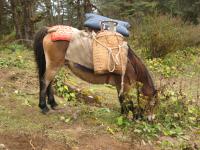 DP_20071015_163416.jpg: Jele Dzong, a very remote small monastery/temple as seen the evening before against a grey overcast sky. 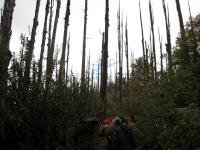 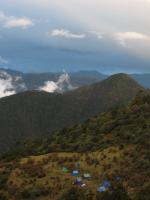 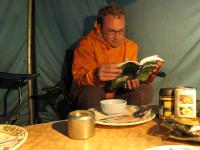 I met Tanja again while walking. We had lunch together, sharing whatever our guides brought. Arriving at the camp site Tanja could even convince the camp organisators to just set up one dining tent and serve us together there, despite us being two different ‘groups’. We were served now from two cooking tents, but sat together for tea in the one dining tent. When it started raining we went back to our personal tents for a nap and/or something to read. I later ventured a bit around uphill to take some more landscape pictures (the middle picture above being one of the them) and returned for dinner. But I had this and all following dinners alone: Tanja had fever. She did not get better the next morning and unfortunately also had to decide to quit the trek, leaving me again alone. 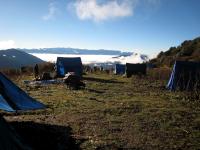 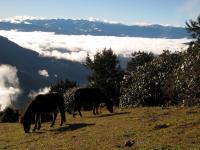 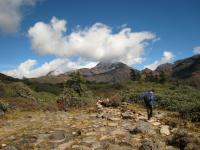 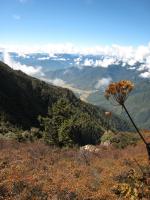 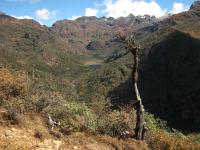 DP_20071017_104915.jpg: The north of Paro valley, the city we had left two days ago. We were walking along high mountain ridges. I don’t have exact figures, but the highest point must have been slightly above 4000m.

DP_20071017_105052.jpg: On the other side the first glimpse on today’s camp side, an isolated lake surrounded by high mountain ridges.

On the ridge we moved back and forth between the left-hand (south-west) and right-hand (north-east) side of the ridge, seeing both sides very well. Unfortunately, the announced main sights of the day, Jhomolhari and Jichu Drakye peaks, were mostly covered in clouds. Find some pictures later. 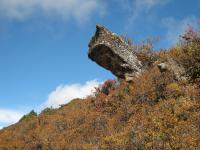 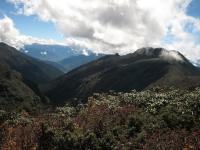 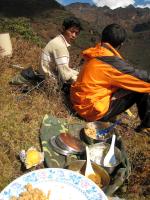 DP_20071017_113431.jpg: Looking back into forest-covered valleys. The past two days happened on the right-hand side of this remote valley. The next days will walk along the other side.

DP_20071017_120948.jpg: This is how a typical lunch during the trek looked like: I was served rice with two other dishes (often vegetables in cheese sauce, and some kind of meat) on a plastic plate. Ratnar (in orange wind jacket) and the camp organizer, who had carried the lunch packed in tin bowls fitting into a thermos flask, usually eat something simpler. I had hard times trying to make them eat also from ‘my’ dishes. 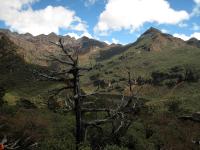 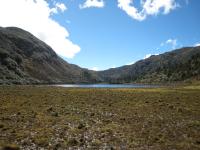 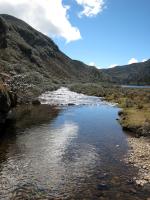 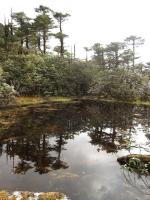 DP_20071017_122920.jpg: Shortly after lunch we descended from the ridges and into the valley with the lake named Jimilang Tsho.

DP_20071017_131601.jpg: The main creek feeding the river with absolutely clear water from the mountain ridges. In 1970 giant trouts (a kind of fish) have been put into some mountain lakes, this one including. In this creek we did see them. 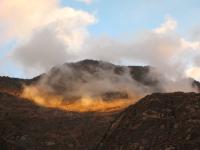 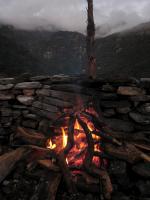 DP_20071017_172450.jpg: The mountain at fire? No…it is just a mood of nature: The last rays of the sinking sun throw a red band on the mountain where just by chance some clouds happen to be. 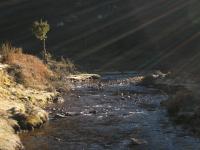 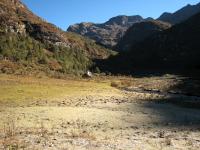 DP_20071018_080355.jpg: The ground was actually slightly frozen as can be seen here: The sun had unfrozen the meadow on the left-hand side already, while the area in front is still covered with a thin layer of frozen dew. 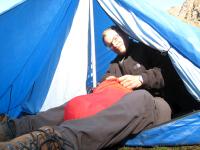 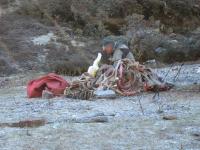 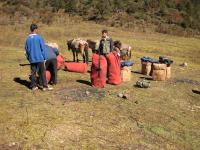 DP_20071018_094457.jpg: Breakfast eaten, horses saddled, tents gone, bags prepared; now they only needed to be loaded on the horses, two bags per horse, one on each side.

Today’s Lesson: It’s cold up there.

One thought on “Druk Path Trek (I) Only One Survives”