?Yea…diving again! Finally in Kata on Phuket I took my chance. And it was a very good deed. Great feeling to be under water again! I had no clear recommendations in the end on where to book in Kata. I ended up with Nautilus, which had a mentioning in Petra’s guidebook. Questions asked were correct, equippment good and well-maintained, too. And while sitting at dinner in the evening at ‘our’ restaurant (it was raining again and we had no intentions of getting wet searching for another place) a Thai lady dropped and handed me a note from Nautilus that my pick-up time next morning had changed. The only thing I would have liked to informed upfront is that I was booked on a non-Nautilus boat. Fine…with so few divers as right now it does not make sense that each dive shop sends their own ships to all sites. It would have just been easier to find the right people at the harbor. I was not prepared to look for M/V Similan people…

The boat was big, larger what I had seen in Vietnam, even with a bit of a kitchen in there, which served a simple but hot buffet lunch. A lot more room in the back. And only few divers on it. 4 russions, 4 Thai, and me the one and only fun diver, while the other clients had some or the other kind of course.

Being the only fun diver has the advantage of having an instructor to myself to lead the ‘group’, i.e. me. Nok, so her name, proved to be very knowledgable with respect to underwater life. She gave me a good map-based introduction into the two dive sites and then loaded me with pictures of fishes we might see…way more than I could possibly remember. Gearing up gave one or the other misunderstanding…based on English as foreign languages and the fact that I had learned a different order of execution…in the end Nok put my gear together (which all was taken from a ‘Nautilus’ gear bag), I only did my safety checks myself.

The day before I had prepared my underwater housing for its first usage. I should have tested it in Ko Samui during our beach days…but I hadn’t. But all went well, the housing proved to be water proof and I made some 120 photos.

Note: I want to better lookup and link the fishes’ names (a bit like my National Geographic Diver Project). But surprisingly I can’t find a suitable cafe here now in Ao Nang with Wifi access for the necessary research. Take for the moment what’s here. I’ll update the article later, moving the “Last Edited” date appropriately. If you are interested in the fish details come back here then again.

Update 19-NOV: With new software I could enhance the colors of a number of underwater pictures. 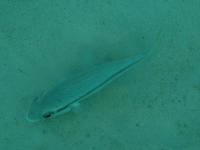 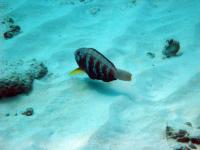 PK_20071103_101259.jpg: My first self-photographed fish! And I can’t tell which one that is…I sure Nok could tell me, but despite writing down a lot of names into my make-shift log book I can’t match all the names with the right pictures.

PK_20071103_101926.jpg: I must say that in general I was a bit disappointed with the camera’s white balance. The Ixus 850IS has a specific underwater program, supposed to reduce the blue shades of underwater pictures. But I actually mostly see blue here… 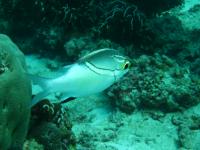 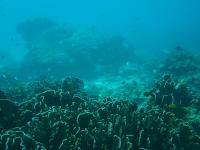 PK_20071103_102619.jpg: That’s a nice one, which even gives you a slight idea of the fact that underwater life in these coral areas can be quite colorful.

PK_20071103_102749.jpg: Underwater landscape, to give you an idea what a diver is usually hovering over, as close as possible…but don’t touch anything!

PK_20071103_103029.jpg: One of my favorite fishes and the first ones I could easily identify under water: Moorish Idols, typical long backward-pointing top fin and yellow/white/black stripes. 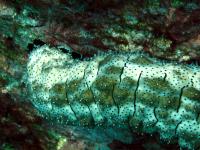 PK_20071103_104639.jpg: A sea cucumber, should be a Marbled Sea Cucumber. Despite the name it is not a vegetable 😉 but an animal. Hm…you shouldn’t touch anything under water to not disturb the life there. 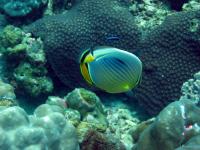 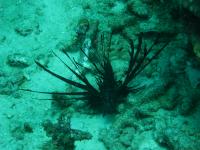 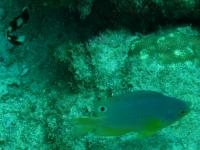 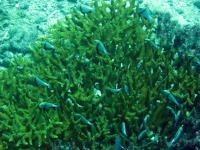 PK_20071103_121716.jpg: Two more colorful fishes (there’s a very small blue one above the big fish in the middle. Shouldn’t be so difficult to identify the big fish…probably a type of Surgeonfish, but I have no books here.

PK_20071103_123352.jpg: Two fishes! The big one in front with the typical black spot behind the top fin is, so I believe, a kind of Anglefish. But what Nok actually got excited about is the very small black-white one in the top left corner: A juvenile Dotted Sweetlip Fish, if I got the explanations later on the boat right. 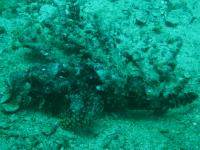 PK_20071103_123605.jpg: I would have missed it, but again one of the more rare sights, which I only got pointed to thanks to Nok: A Scorpionfish, well disguised and partly covered with sand (front is on the left). 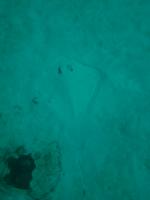 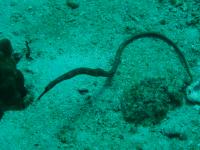 PK_20071103_124947.jpg: This guy will stay difficult to take photos of: A Sting Ray. But they are so damn fast…I had him focused only when he slowed down again a few meters away, which explain whythe picture is mostly just blue.

PK_20071103_125841.jpg: Here I am just a meter away, above as a matter of fact. If you get this photo you might find the disguised Sting Ray burried in sand. But I have no clue how Nok spotted it on several square meters of white sea ground…

PK_20071103_125253.jpg: Uups…forgot to write down the name of this guy…grrr….a pipefish probably. The only pipefish’s name I wrote down later when Nok got over all fish pictures with me was “Short-tailed Pipefish”. This guy doesn’t exactly look short-tailed, does it?

Lesson learned: During the debrief/fish identification write down the fishes’ names together with the photos’ timestamps! 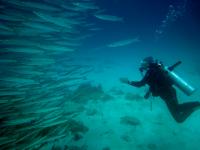 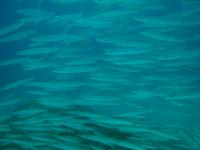 PK_20071103_130351.jpg: One last lesson in disguise: You might find the fish burried in sand here, but again…imagine several square meters of it and then try to find it… (I could give you the full-sized picture for a start ;)) It most certainly was Nok again to point me to it. 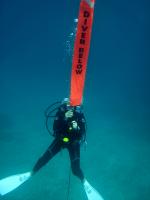 PK_20071103_130634.jpg: Shortly before ending out dive: We are hovering for 3 minutes at 5-6m as a decompression safety stop, standard procedure. Nok unpacks this flag which she blows up with air from her regulator and raises it to the surface to warn boats around. It will later also serve to call our boat to pick us up. (How comfortable…in Vietnam we had to find and return to our boat ourselves. The boat there picked up people only once, and these guys then received some sarcastic comments about underwater navigation ;))

PK_20071103_144942.jpg: The back of the diving boat with ‘my’ rented equippment already packed again in the black bag. The stuff hanging to the left are wet suits, the tanks certainly contain our air. The boat has a compressor on boat, so the tanks are filled up right on the boat. In Vietnam they were filled on land and carried to the boat, which also meant we had to switch bottles between dives while here the tank was just filled up during lunch break.