Hanoi still and by far is the more relaxing, and by the same time more lively city, compared to Saigon. I thought so two years ago, when it was the first city of Vietnam I saw. And I still think so this year, when it is actually the last. And so thinks Nina.

We did arrive in the late afternoon of 22-AUG and were brought to a hotel we had have reserved by our Ninh Binh hotel. We decided rather quickly that we would change the hotel on the next day. So the first thing was to find another one. We walked up and down some streets I remembered from two years ago, find a small place named “Royal Hotel 2”, which offered us an OK room for 25 USD. The lady was also very helpful in right away organizing the trip to Halong Bay. As we longed for some good vacation within our vacation we accepted the most expensive option on an upper-class junk, hoping not to have to deal with any hassle…what a mistake.

The first evening we just strolled around, soaking up the atmosphere, looking for a restaurant. I didn’t even bring the camera. When we found that a place recommended in Lonely Planet didn’t exist any more (well…my edition of LP Vietnam is some 4 years old…) we ended up in a very good restaurant named just “La”. Not the cheapest, but cozy atmosphere, attentive personnel, and superb Vietnamese cuisine.

Long-time readers might remember that I had quite bad luck with paying the big leaders a visit. Mao didn’t work out in BeiJing due to renovations, as was the case for Tian Kai Shek in Taipei. And during my first visit to Hanoi I couldn’t see Ho Chi Minh either as I had overlooked a tiny little detail: Visiting times only in the morning, last entry around 10:15.

Nina now paid that attention and we scheduled the visit for the next morning, 23-AUG. While I wanted to get there by motor bike, just to introduce Nina to the local way of transportation ;), Nina was twice so lucky that there were many taxis around…so we got there and away by taxi.

Queues to Uncle Ho are long. Very long indeed. There is a long covered hallway half around the museum site, but as we picked a Sunday it was all full. I have no clue at all how many hundred if not thousand people (by far most of them Vietnamese) queued up before us. But the line was moving rather quickly: Like in BeiJing the people are constantly being ushered on by the guards. Watching the people was some fun by itself. But I have no pictures as you have to leave your luggage at the entrance. Different windows for foreigners…once at least we a treated better 😉

Every once in a while a guided tour group was squeezed into the line, but all in all we kept moving in the middle of hundreds of locals. Eventually, we entered the mausoleum, up to flights of stairs and there he was: Ho Chi Minh, mummified, lying in a huge sarcophagus, like he never wanted to be presented to the world. (His wish was to be burned and his ashes divided amongst South, Central, and North Vietnam.) But before you could think too long about it you were out again in the blistering sun.

We walked around the museums area, saw the garden house, in which Ho Chi Minh is said to have spent a lot of time, before we fetched the bag again and moved on to the museum.

First: The Ho Chi Minh Museum is probably one of the most weird museums I’ve seen: On the one hand it tries to teach people how Ho Chi Minh grew up and became the Vietnamese people’s Leader (no digging too much into the actual war, there are other places for that).

Second: On the other hand it is a collection of artists’ installation representing solcialist “ideas”. These installations are impossible to understand in a hurry without reading the accompanying texts. Just as an example, the text for this room reads: “Ho Chi Minh and the movement for national liberation / The volcano and the national totems symbolize the great power of the national liberation movements throughout the world. They also symbolize how greatly the Vietnamese revolution under Ho Chi Minh’s banner encouraged other struggles for national liberation in Asia, Africa and Latin America in the wake of World War II.” I keep wondering if all the Vietnamese families flooding the museums can actually enjoy this kind of art.

Nina had never made her wish a secret to buy souvenirs in Hanoi. We even had planned to look for furniture to be shipped home. That was due now. So we visited a few shops, also on furniture, and came back with a few bags full of beautiful stuff. It didn’t take as long as I had been afraid of, and all things served some kind of purpose (which is why I don’t relay details…some of the readers might find themselves the receivers of some of the goods). But as quick as it was, we had walked quite a bit and longed for a coffee. After that we cut the LP Walking Tour quite short, but still visited the major handicraft streets.

Third: Lucky money, to be burned at temples; and greeting cards.

First: A local market. Lots of food and clothes. But the locals can’t stop driving through these tiny aisles with their motor bikes!

First: Laundry’s ready! With the hot and boiling weather we sweated through a lot more clothes than I had ever anticipated. Luckily, our hotel could do the laundry same-day. We used that twice.

Second: A gong! A nice gong, isn’t it? We found it in a shop right across the street from our hotel. And we fell in love with it. So we bought it! 🙂 After a lot of discussion with the young shop keeper, who was not the manager and hence did not take any decisions.

Only days later (the Halong Bay visit inbetween) we met the manager and everything worked out very smoothly: The gong had been packed in a cardboard box, the stand disassembled and packaged in piecesas we had asked for. With the manager we could easily agree to get an invoice with a lower price for customs while we paid a higher. And with a taxi we brought our gong parcel to the international post office and had it ship back to Germany. For cost reasons by ship. That can take anything between three and six months. We see if that works…but air transport would be more expensive than the gong’s value.

First: The railway link to China. Ok…it’s some way…but if you follow these tracks you should end up in China. The interesting detail of Vietnamese railways is that it is the trains which are stopped by a barrier at a crossing with streets. Like here. I can’t remember what a railway crossing looks like when a train passes through…and this year we didn’t go by train at all.

Second: Main gate to the Temple of Literature, still a very nice place wirth a visit or two. See my previous article on it for more details.

Third: Turtle heads. These turtles carry stone boards with the names of those students who had passed the exams successfully. Year after year.

First: Yet again burned incense sticks… 😉 kinda like this motif.

Second: In the last building on the upper floor. I would think it depicts a scholar supervising students. But the entire setting is very much temple-like, including altar.

We added an early dinner at Koto (Know One, Teach One, a charity organization, who helps street kids by educating them as cooks or service personnel, running their own very good restaurant) and strolled back through some streets home with no particular target. 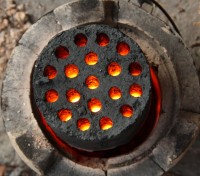 First: Döner at Cafe Goethe in Hanoi! I couldn’t believe my eyes and had to take this photo to be sure… For the international readers: The Goethe Institute is a German governmental institute to promote German language and culture out in the world. And well esteemed. Döner, however, is street food, which was brought to Germany by Turkish work immigrants a few decades ago. It becme very popular street food in Germany (and yes, I like it, too), available nowadays at every other street corner in all cities. In so far, it kind of became German culture. But still…it is of Turkish origin and every German knows that (or is reminded so if he visits one of the many Turkish snack restaurants offering Döner).

Second: Did you guess what that is?

It is actually a charcoal block burned on an makeshift oven on the street.

We now just headed for a cool drink with a chance to finish off another of these articles. And the next day we will fly out to Luang Prabang, Laos.

Today’s Lesson: Shopping can be fun.