Flying out of KunMing yesterday was no big hassle, though during check-in they wanted to have an own copy of my Visa-on-arrival-approval letter. Well…they copied it then themselves. Approaching Hanoi the first glances on Vietnam from a bird’s perspective did not look much different from China. As expected. Just a bit greener. And for a long time I was searching in vain for actual Hanoi city out of my plane window. I saw a runway beneath us and knew that the airport is some 30km off Hanoi city. But while circling over the airport I had expected to see something…only shortly before touchdown I made out the big advertisements along a street and then knew in which direction to look: Along the ads I saw some very few high-rises in the far back. And no air polution. And that made the major difference: Everything is a bit greener, a bit more colorful. Already from the plane I saw that quite some houses, though small and structurally not much different from Chinese houses, are in better shape, better maintained, some freshly painted in bright colors. END_OF_DOCUMENT_TOKEN_TO_BE_REPLACED

…all I remember from my Lonely Planet about it is something to the line of “there’s nothing to see in KunMing proper”. Well, I sent my LP home already in the package from YangShuo, so I don’t have it anyway. And all I wanted to do in KunMing was to see the Stone Forest, which got quite some praise from various people, last from Rita and James. END_OF_DOCUMENT_TOKEN_TO_BE_REPLACED

Alone again…I bid farewell to Rita and James this morning after breakfast as they are heading back to Canada by way of their Chinese ‘home’ and Shanghai. I’ll miss their company: Riding the bicycle alone through the YangShuo scenery might be faster, but also more quiet. Yesterday, we had spent a relaxing day ‘hanging out’ at YangShuo, not doing anything. Rita was still a bit handicapped, and so we stayed for 3 hours at the breakfast cafe, separated for a few hours (they shopping, me organizing a parcel back to German and a fax to the US), and staying from 5pm til midnight in another cafe, emptying various coffees and no less than 13 bottles of beer (for James and me) on the occasion. Life can be so simple and wonderful… END_OF_DOCUMENT_TOKEN_TO_BE_REPLACED

Oh…YangShuo is so great a place to just hang out… I had always wanted to spend a day on the bamboo rafts crossing up and down the rivers. As Rita was a bit handicapped anyway and the weather was great again it was the perfect day to get driven out to YuLong River, hop onto the bamboo rafts, and get slowly moved down-river through stunning scenery. Views are comparable to Li River, if not even better. And no annoying loudspeaker announcement or engine sounds around. Just silence. Or water fights… 😉 END_OF_DOCUMENT_TOKEN_TO_BE_REPLACED

Despite the money it costs and the bad weather forcast I had opted for accompanying Rita and James on the Li River cruise once again. A great decision! The weather forecast proved completely wrong and it was a nice sunny day with very good views on all the limestone hills along the river. Not that we could identify much more of the rocks named by the Chinese, but just the scenery as such, without names, was great enough. Compare these pics with my first tour here in February! (Organization was similar this time, but the bus not full, and I had an iPod to block out the unavoidable guide’s talking 😉 Most surprising: No bamboo rafts selling souvenirs on the river!)

The tour was organized via Rita/James’ hostel and for cost reasons we chose the Chinese tour. It was nearly 200 RMB cheaper than a western tour. We just endured the half hour talk on the bus, waited patiently at the unavoidable jade shop, got on the boat and enjoyed the scenery ourselves. Arrived in YangShuo we didn’t even bother finding the bus but just directly checked into our respective hotels. 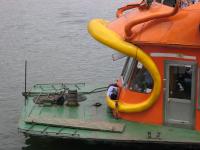 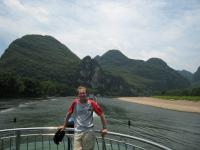 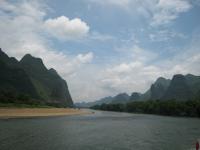 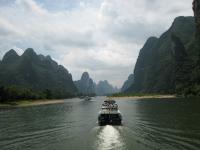 GL_20070722_110337.jpg: At the very beginning: One man in official looking uniform takes a nap in a position I would not obviously consider comfortable.

GL_20070722_120122.jpg: Now while writing, I am surprised to see that there is a full hour time difference between the first two pics…but certainly the scenery started off earlier than this picture. 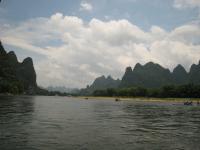 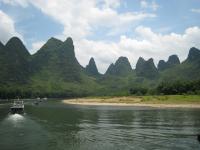 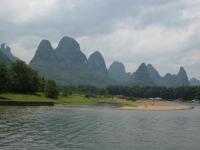 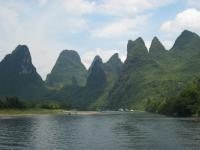 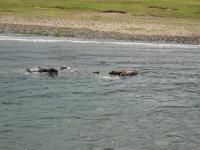 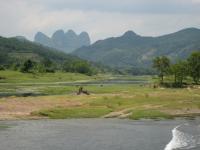 Today’s Lesson: Don’t trust the weather forcast…it can be better!

…again. I did this very same tour already once in February this year. But it was exactly what I wanted to do again when coming to YangShuo once more. No difficulty convincing Rita and James either. And so we got 3 bikes and set out. With me now knowing the way we could save some detours and everything went very well and nice, until….somewhen later. 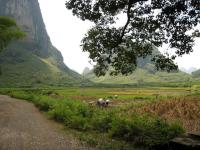 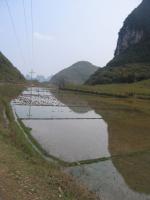 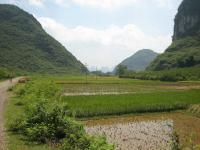 YS_20070723_110646.jpg: Harvesting rice in the ubiquitous rice fields arond YangShuo. The rice in the fields was in very different states of maturity, some ripe to be harvested, other fields just harvested, yet others looked like half-way through, in yet other fields farmers were just planting new plants. We quickly got the impression that they are farming here all around the year.

YS_20070723_111207.jpg: …and did basically the same picture again (though I forgot that the original one was portrait, not landscape…sorry) at the very same spot, looking into the very same direction. In February all fields are just empty. Now in July some fields are empty, but they look like just harvested (some stalks still protruding through the water), other fields have fresh green plants.

YS_20070723_112003.jpg: Anyway…at the moment you find all kinds of maturity, embedded in the every same beautiful landscape. 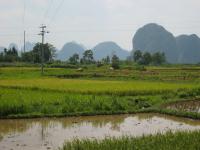 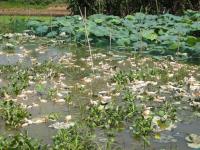 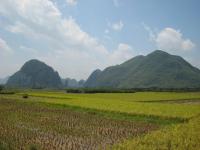 YS_20070723_115739.jpg: We met very few other bikers, it was pretty hot. Quite OK as long as you moved, but if you stopped for a good picture you could cut the standing hot air with a knife. Rita and James ahead of me on the road here, some farming device parked to the left, the ubiquitous limestone hills forming the backdrop. 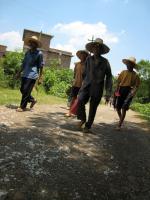 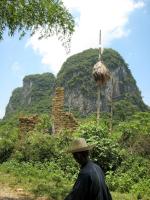 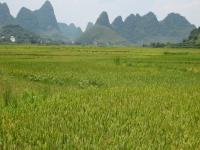 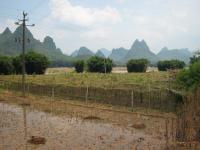 YS_20070723_120309.jpg: These farmers emerged from their lunch location shortly after we passed and briefly rested in the shadow of a tree. I have a series of 4 pictures how they walk up the street, and the smiling front guy keeps smiling through all this pics, though he cannot possibly know that he got photographed as I did these picture hidden as hip shots to preserve the farmers naturalness. Especially watch his oversized golden front tooth, possibly the reason for his everlasting smile 😉

YS_20070723_121530.jpg: Ripe rice fields…until the limestone hills cut off the horizon. Doesn’t look unlike wheat fields back in Germany, in the end its all some kind of descendant of grass.

YS_20070723_130133.jpg: Harvested fields next to fields, of which I cannot identify what’s growning on them. In the background the Li River and…yea…limestone hills.

And not too long thereafter our attention turned away from taking pictures: Rita fell off her bike unluckily and for no reason we were able to reconstruct. Nothing really serious happened, but on the stone-covered dirt roads she suffered from some bad cuts, which we could only very provisionally look after and which must have hurt badly. One cut was especially deep and urgently needed to be properly cleaned and desinfected by a professional. Rita stood it great but understandbly couldn’t go far any longer.

As it so happened it was shortly before reaching our planned turning point, i.e. as far away from YangShuo as possible. We turned around and could for good money convince the owners of a truck to bring Rita, accompanied by James, including their bikes, back to YangShuo to a hospital. I returned on my bike. In the end we happened to return our bikes nearly at the same time with Rita been seen to by a doctor. The rest of the day was mostly a relaxed search for coffee, dinner, and beer. We found all 😉

Today’s Lesson: If something happens, you’re as far away from home as possible.

You likely have seen cool pictures of the LongJi Rice Terraces, like in the rising morning sun, or in moon light, or even covered by snow. Well…we weren’t there at a time you could shoot any of such pictures. Maybe that is why the expectation was higher than what we eventually saw.

END_OF_DOCUMENT_TOKEN_TO_BE_REPLACED

Nothing interesting happened today. And there is likely not anything interesting to be happening tomorrow. Let me just give a brief note that I am still alive and well. I spent a lot of time waiting at airports today. END_OF_DOCUMENT_TOKEN_TO_BE_REPLACED

I just had a quick walk around LiJiang’s Old Town by night. From my new location, the Ancient Town Youth Hostel, that is basically just a step over the door step. END_OF_DOCUMENT_TOKEN_TO_BE_REPLACED