Hue, the emporers’ capital for quite some time. Its citadel and tombs tell some of Vietnam’s glory history. The citadel reminds one of BeiJing’s Forbidden City. And the tombs, some 200 years old, are left pretty much in their original state, hence can convey an atmosphere of history. But, alas, also they are being more and more restaurated. Hopefully to the better (some finished parts of the palace look great!), but that touch of historic atmosphere might get lost as it often did in similar places we’ve seen in China. END_OF_DOCUMENT_TOKEN_TO_BE_REPLACED

HoiAn was a tranquil village when I was there 2 years ago. It has changed, though. As Nina put it: “I would still recommend visiting HoiAn, but it’s getting too much commercialized.” While I certainly remembered a lot of things and found some places I had been before, there had also a lot of cozy hang-out places gone and been replaced by the 36th incarnation of a souvenir shop/gallery/clothes shop. In general, the restaurants moved up by half a category, as did their prices. And the number of western-style dishes on the menu increased dramatically. Hurry up, if you still want to see a Vietnamese HoiAn! END_OF_DOCUMENT_TOKEN_TO_BE_REPLACED

Arrival in Saigon was largely uneventful. The cheap Air France flight turned out to be a flight from Paris with stop-over in Bangkok. The only little hassle was to find a taxi, which we could only get from the departure level of the airport: There was a taxi stand…not at the arrival level. The taxi driver had some issues finding our hotel, though it was one of the better places in town (on the first night we played safe). But in the end everything was no hassle. Except for the temperatures…even the locals sweat like waterfalls and complain. There’s little rain these days, despite the calendar saying it’s raining season. END_OF_DOCUMENT_TOKEN_TO_BE_REPLACED

There has been some time of quiet here in this blog…you probably forgot over time, that you have a subscription here at all 😉 Welcome back!

But before we get too enthusiastic: It’s for 3 weeks. “Only,” you might want to think. Swallow it…it’s vacation this time, not time off. We are on our flight to Bangkok for a well deserved 3-week-vacation to Vietnam and Laos. And, yes, “we” is not pluralis majestatis, but means two pax: Nina and me. END_OF_DOCUMENT_TOKEN_TO_BE_REPLACED

We lost :(( all the heavy work in the last two weeks in vain. That’s life, you can’t win them all. But at least I know that I still can work and can add value. And I was reminded that there are a lot of capable and friendly colleagues around, who can make even long hours of work a rewarding experience. Although I have to watch out that I don’t loose the work-life- balance. It might sound improbable to many non-consultants, but I consider it an achievement not to boot up the company’s laptop, not to check company email during the entire weekend during such a highly important phase like a proposal is. I even missed the message about us having lost the deal for a full day as I had not checked my mail until the previously announced deadline. END_OF_DOCUMENT_TOKEN_TO_BE_REPLACED

I’ve recently seen a note of some insane workaholic, who transported the impression that he loved returning to work after some months of vacation. How crazy can people become to replace vacation with tough work through long hours??? Hello, nock, nock, anyone at home? Drinking beer and going out for lunch with colleagues isn’t exactly the definition of “work”, is it? 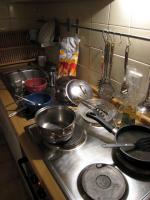 I tell you a secret from this week’s experience: It is absolutely no fun to work an estimated 60 hours between Monday morning and Friday noon and produce about 80 pages of five times reviewed output in our Kronberg office far away from any bar, which would offer a nightly beer. None! Instead delivered pizza in carton boxes…oh, I hadn’t really missed that. Worth noting: Sleeping in trains while commuting doesn’t seem to be as effective as sleeping in your own bed.

I’m sitting here now at home at 7pm, my kitchen looks like hit by a bomb, and I can’t even enjoy any feeling of a great achievement because I simply have difficulties looking straight ahead, so tired am I. This afternoon I had to ask a friend who I met for a coffee to pay for me…how embarassing…I simply ran out of cash, no time fetching new cash.

Fun working…what a bullshit! These guys should be prosecuted!

The most fun we had was about spelling mistakes (sorry, that’s mostly for Germans with English slang knowledge…) like

I will now try to find something to eat in the left-overs of the kitchen and then have a good night’s rest. And if tomorrow I find this mad guy I gonna have a serious talk with him!

I work again. Quite suddenly. 10 days ago I received a call of a colleague and couldn’t say “No”. Proposal, tough work usually. But honestly…it started to be a bit boring just to sit there all day and sort photos. About the only thing I got done was uploading a number of best-of series to Flickr. No appointments, no deadlines. I became very inefficient. One day I wanted to send a letter with registered post, so I had to get to the post office. I messed around all day until I noticed that the post office would close soon…at 6:30pm. I hurried there just to note that by now all ordinary people had returned from work and queued up in long lines in front of the post office to deal with their post chores. I had to wait in line for about 20 minutes. END_OF_DOCUMENT_TOKEN_TO_BE_REPLACED

I’m back home in Frankfurt after five months of travelling. The flight was eventless, but the welcome in Germany everything but warm. Literally and metaphorically. Long queues in front of immigration, which was a rare thing to see, especially as here I can go through the supposingly quick “EU Residents” channel. The immigration officers were even a bit more friendly than usual, joking a bit, though they sent the Japanese off to the right queue with bad English and again a bit harsh. Why do immigration officers need to be so harsh all around the world? Mostly at least… I remember one poster I believe in the Malaysian landborder checkpoint reminding the officers to offer a smile. It didn’t help much. But in general I keep thinking that the German officers are the most blunt. It isn’t a great job to look at a passport and put it into a computer reader, I agree. But they have chosen that job, haven’t they? And immigration officers are the first people to be seen by visitors to the country. As we all know: It’s the first impression for which you don’t have a second chance… END_OF_DOCUMENT_TOKEN_TO_BE_REPLACED

A Quickie as I’m sitting at the airport already, checked-in and all. Just had to start my laptop anyway to charge my iPod, which I forgot before…darn! And this is still Singapore, so there’s no shortage of WLAN. As announced earlier I paid a visit to the Zoo today. It’s a big zoo, especially in terms of area usage. There might be zoos with more different species, but the arrangement in the park area is really a worthwhile visit. When thinking of ‘zoo’ I still picture my first one back in Rheine, the small city I was born in. (Now called NaturZoo Rheine.) Probably a small zoo…but I was less than six years old and all looked great and big and especially sunny to me. So zoo is always something good! 😉 (We probably never went to the zoo during rain…that’s why a zoo is always sunny to me.) For getting there see Night Safari…I took the same way this time again. END_OF_DOCUMENT_TOKEN_TO_BE_REPLACED

After yesterday’s running through all Singapore and back I put in a more lazy day today. Despite it being the last full day of travelling I didn’t want to overdo it. Not now at the end! 😉 And anyway…the limited size of Singapore gives only a limited number of sights to see. Some I don’t need to see (not yet another bird park, for example), and the zoo I parked for tomorrow. But some of the city of Singapore was still left to be explored. END_OF_DOCUMENT_TOKEN_TO_BE_REPLACED